‘A business is like ice-cream’: Delving into Malta’s very own start-up incubator

From 'speed to succeed' to a business degree with medical terminology, things are done a bit differently at CEBI 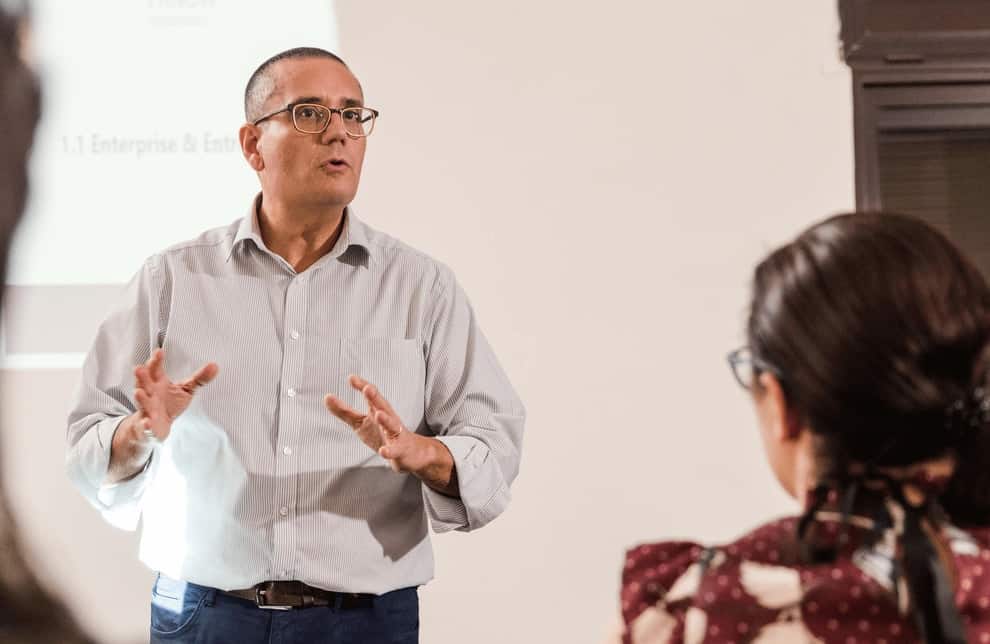 Last week saw the launch of a new agreement between two local entities providing support to start-ups, which many hope will usher in a new era of innovation.

Set up in 2012, CEBI and TAKEOFF were originally conceived as an EU-funded project that saw Oxford University Consultancy brought in to design the programme.

Among the consultants was Dr Smith, who has now been here long enough to take on several Maltese characteristics (including a love for the sun and for a well-made plate of octopus, quips Mr Bartolo).

Over 150 students are alumni of CEBI, and the results speak for themselves, with 94 per cent rating it as “excellent” and “life-changing”.

“I thought, ‘I have a whole life of experience behind me, let’s see what they can teach me.’ But the results were staggering.”

He speaks about it in transformational terms: “It was my own road to Damascus moment.”

For Mr Bartolo, being manager of TAKEOFF feels a bit like life coming full circle, as he now conveys what he’s learned to those coming for help.

“I’m able to share what I’ve learned through the Master’s and my own life experience with setting up my own business,” he says, adding, “And thankfully knowing how to close that business because things did not go so well.”

Mr Bartolo, an engineer by profession and an alumnus himself, describes his own experience.

“I was a very difficult customer for these people,” he laughs. “I entered at 50, having left Government service after running national laboratories.”

For Mr Bartolo, however, this experience puts him in good stead to help others wean out their problems.

It is a point of pride that people join from all across society, with intake not limited only to people in commerce and management, but also engineering teaching, and banking.

“You name it, we’ve had it,” smiles Mr Bartolo. “Doctors, soldiers, architects – all coming to learn how to think about enterprise.”

Mr Smith, mostly quiet until now, chimes in at this point. “Thinking about enterprise… Where do you start? If you type in ‘start-up support’ on Google, you’ll get eight billion hits. There’s just so much information about start-ups.”

TAKEOFF’s proposition is – ‘Don’t worry about that. We’ll help you.’

“The current vogue in business schools around the world right now is the ‘fast to fail’ approach,” explains Dr Smith. “But our approach turns it on its head. We’re all about ‘speed to succeed’.”

He dispels the concept that a person with an idea that does not make it to market is a failed business person, preferring to think of it in terms of avoiding avoidable risk.

“And the good news is,” jumps in Mr Bartolo, “that none of our mentoring sessions last over an hour.”

Mentoring is a huge part of the programme, but they make it clear that it is not the kind of mentorship “where someone stands up to volunteer their experience and hope it helps”.

“That’s all wonderful and lovely,” says Mr Smith, “but sometimes there are people who have a lot of knowledge about a technical issue or a sector, and some knowledge about business, but only in that sector.”

One of the big propositions put forward by the pair is that all sectors are identical. Mr Smith compares businesses to ice cream – “it’s all made the same way, but with different flavours,” with the flavours here represent the economic sector a business is active in.

“People think it’s much cleverer than that,” says Dr Smith. “But it isn’t. The truth is, it’s really that simple. You have to work through the same basic ideas. And that’s what Joe [Bartolo] does with people at TAKEOFF.”

“So what we offer,” explains Dr Smith as he gets down to the bones of it, “is a proven programme that’s been used around the world. We offer a step-by-step guide to building a business and it’s equally applicable to the person working from home to the person building a multi-million empire. It’s for the person using their savings or the one raising equity finance, the one speaking to the bank or the one borrowing from their friends and family.”

“We know that it works because this programme, first developed at Oxford, has been operated in 36 countries and produced over 7000 start-up businesses.”

“So it’s not something we just invented,” laughs Dr Smith. “It’s a well-trodden path.”

The programme first asks, ‘What’s the problem you’re going to solve for the customer?’ Then, ‘What is the solution?’

“We walk people through that and then we focus on the benefits of this solution,” says Dr Smith, who stresses that the benefits are a lot more important than the features (something he finds aspiring tech founders often get overly distracted by).

“Then we talk about the value, and the value is not more than the benefits divided by the cost. And it is only then that we look at the business, the enterprise that will deliver that solution to the customers.”

Dr Smith and Mr Bartolo are emphatic that CEBI and TAKEOFF exist for the people of Malta and not as a purely academic entity.

Dr Smith explains: “Is it underpinned by academic rigour? Hell yes it is! Do we use big words that make us sound clever? Never.”

He explains that the vision of the Centre is to work with real people, “so we use real language”, believing that using real concepts everybody can understand make notions easier to convey.

Turning to the recent deal signed with Malta Enterprise, Dr Smith believes this is a remarkably exciting time for Maltese start-ups, with academia and the Government working hand in hand to help anyone start their own business, no matter the sector.

“We’ve got a course that has been proven, worldwide, to be very effective, and we’ve got it linked with funding.”

For Dr Smith, there’s also more than a hint of personal satisfaction. “Being here now at the autumn of my career, with an opportunity to make a difference nationally, is very exciting.”

As we move to close off our interview, Mr Bartolo gives the floor to Dr Smith to sum it all up.

“In summary, the start-up scene is very buoyant in Malta. The challenge is not about people having good ideas, it’s about them getting good advice to help make their idea a reality.”

“We look at the anatomy of an enterprise (what it’s made up of), at the physiology (how the bits work together), the pathophysiology (what happens when things go wrong), and at treatment (how to stay healthy).”

“So it’s exactly what you would expect from a business curriculum if it was written by a medical school and not a business school.”