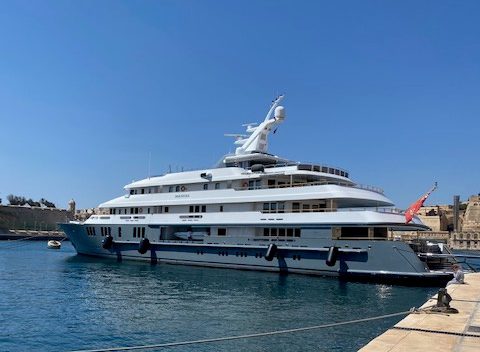 The Boadicea, a 76.6 metre, 8-cabin superyacht on sale for €38.5 million is the latest regal addition to the already illustrious line-up of boats at Vittoriosa Marina.

Spotted casting anchor, the vessel, which can be chartered for €525,000 a week, houses such amenities as a master suite with a private terrace offering a 180-degree panoramic view, a salon and an office.

Extra features include a guest elevator, spa gymnasium, beach club (with bar, pool and sundeck), and a helipad.

Built in 1999 by Amels, the yacht was owned by late Australian media mogul Reg Grundy who was perhaps best known for his company’s production of popular soap opera Neighbours.

The presence of the luxury vessel in Malta is unsurprising when considering the strength of Malta’s maritime registry. While this particular vessel is registered in the Caymans, Malta continues to attract super yachts on the strength of its thriving eco-system.

As of 2020, the Malta Shipping Registry ranked first worldwide for the number of superyachts registered, with over 850 vessels qualifying for that category.

Read next: As vaccine rollout continues to stutter, AstraZeneca COVID vaccine tries to wipe the slate with a new name