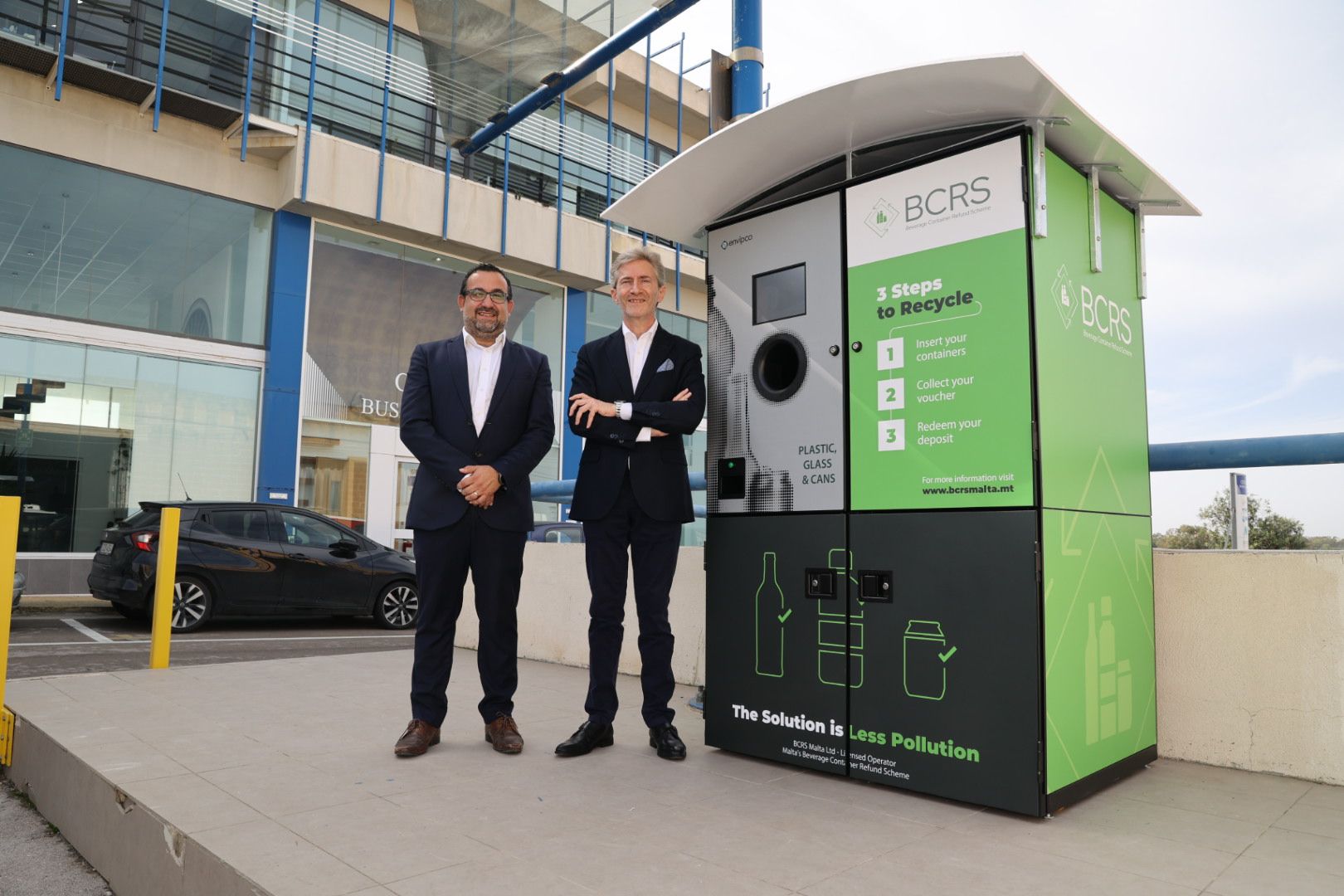 Malta’s long-anticipated Beverage Container Return Scheme (BCRS), operated locally by BCRS Ltd, will see a new launch date set for “a few weeks’ time, prior to summer”, CEO Edward Chetcuti (pictured above, left) shared in an interview with this newsroom.

The latest launch date had been set for 1st April, however, this was again postponed with the company having not yet been in a position to launch as the pandemic caused widespread disruption, and supply-chain issues meant the Reverse Vending Machines (RVMs) vital to the scheme were still arriving in Malta. They are currently being installed across the island.

BCRS Ltd CEO Edward Chetcuti sat down with BusinessNow.mt to go through the concerns raised by businesses who will be legally required to take part in the beverage container return scheme.

First thing’s first – what is a BCRS and how will it work?

The beverage recycling scheme intends to address waste management failures by adding 10c to the cost of beverages covered by the scheme, with consumers able to recoup the charge by depositing empty containers at the aforementioned RVMs located across Malta’s village cores or a ‘designated redemption location’ – which can also be through RVMs located at major retailers.

Consumers who purchase a beverage at a local grocery store, for example, can then deposit that container – which must be in good condition with the barcode easily read – at any of the public RVMs across Malta’s village cores and will receive a voucher to be redeemed against a bill at any retailer.  If the container is returned at an RVM located at the premises of a major retailer, then the voucher issued is redeemable only at that major retailer or its chain of outlets.

This deposit will initially be paid by beverage importers and producers to BCRS Malta Ltd, and will then be passed on down the supply chain, with each step paying 10c to its predecessor, from the importer through to the distributor, to the retailer, be it a shop or hospitality venue, to the final customer.

In cases where a beverage is consumed on site, such as at a bar or a club, the establishment may only charge the consumer 10c if the beverage container is taken off premises by the consumer. So, say a bar serves a customer a can of beer, and the customer drinks that beer seated at said bar, no 10c deposit is to be charged to the customer. The bar would have paid out the 10c deposit per container to the wholesale distributor where it purchased its stock, and would be responsible to return those containers to an RVM or via a collection service (more information on this below), where they would be repaid the 10c deposit through a fund at BCRS Ltd.

What beverage containers fall under the scheme?

Not all beverage containers form part of the bottle return scheme, such as dairy containers, juice and nectars, wines and spirits, beverages in cartons and more.

Water and flavoured water containers, non-carbonated and carbonated soft drinks, ciders, beers and other malt beverages, ready to drink coffee, flavoured alcoholic beverages where the alcoholic content does not exceed five per cent and dilutables all form part of the scheme.

RVMs and how retailers can return used beverage containers

Mr Chetcuti said that BCRS purchased a total of 331 RVMs through a €7.2 million investment. He revealed that the majority are in Malta, with the final lots arriving in the coming weeks.

“We have started installing them and will instal them at a rate of 30-40 per week. They will not be usable however, until the scheme goes live.”

While final consumers should use the RVMs to receive a 10c voucher per container that can be redeemed at a retailer against their bill, businesses using the RVMs are being given a redemption card service, where they can go to an RVM at any time, scan the card so that the system is aware of which business is depositing containers, and instead of receiving vouchers back like a consumer would, they would receive the 10c deposit back directly into their bank accounts, resulting in a B2B transaction between BCRS ltd and the business.

Remember, businesses where beverage containers are consumed onsite are responsible for returning those containers to BCRS Ltd should they wish to recoup their 10c deposit paid out to wholesale distributors.

What happens if for some reason an operator does not want to use an RVM?

BCRS Ltd has laid out clear incentives for businesses to use the RVM machines rather than make use of a collection service available free of charge on a monthly basis. While using the machines would mean businesses have to individually deposit each container, something that would take time, especially for larger bars and restaurants, it would also see them get their deposit per container refunded via a bank transaction.

For the collection service, businesses need to use bags and special tags to seal them, that can only be obtained through BCRS.

BCRS will offer a free collection once a month, beyond that if a business wants more frequent collection, this can be organised through the same collector at a cost, using an online booking system.

Mr Chetcuti said the company encourages the use of the machines primarily for the immediate sorting of containers that are out of scope, as the machine would reject it. Should businesses try to include out of scope containers in collection bags, he said they are running the risk of being excluded from the collection service.

He added that another benefit of using the machines is businesses do not end up with bags of beverage containers taking up space at their facilities until collection day.

“We encourage the use of RVMs as it reduces risk of pilferage as empty containers now represent money, has less space requirements and you get paid efficiently as there’s a B2B transaction. But, we understand there is a cultural change here so we are offering multiple routes until one starts to understand what really works through experience.

“This can only work through the collaboration of everyone. If we start picking holes we will find what to pick but in the end it is a cultural change and we need to find the best way to do it collectively.”

What happens after used containers are collected?

Used beverage containers are sent to BCRS Ltd’s Clearing Site in Hal-Far, which Mr Chetcuti described as a state-of-the-art building. He also said that it is almost ready to start operations.

“It is an incredibly building, a lightweight one made of wood, glass and a bit of concrete. It’s a lightweight environmentally friendly building installed using the most advanced waste management technology in the country.

“There will be automated selection of materials using magnetic, eddy current and optical sensors and state of the art technology will also be used for educational purposes with schools and other organisations. We have an IT system in place, commissioned to a company from Europe that has already implemented a number of deposit refund systems that links through the Internet Of Things technology. The system links the 331 RVMs across Malta to the clearing centre, and brings everything together in one automated efficient transparent and secure system.”

And, while the scheme has been dogged by delays and concerns, Mr Chetcuti said that the company this week has intensified B2B communication efforts, to get all players onboarded, after which a wider public information campaign will commence.

“In Malta, we recycle around 15 per cent of beverage containers, whereas countries like Estonia and Lithuania recycle some 92 per cent through this scheme. If we hit the ground running, get everybody on board, get enforcement right and start strong, it will lead to a cleaner Malta, which is something we all want to see.”

Read next: More than 4 in 5 Maltese pleased with their financial situation