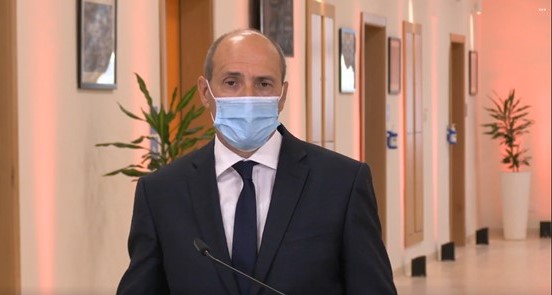 The COVID-19 mitigation measure stipulating that catering establishments like restaurants and bars need to keep two metres between tables will be lifted as from Monday 17th January, Health Minister Chris Fearne has announced.

Restaurant owners will also breathe a sigh of relief at a revision of the rule, coming into force on 17th January, that catering establishment staff must be fully vaccinated (including the booster shot). Backroom staff will no longer be included in this requirement.

However, client-facing staff must still abide to the rule.

The current restriction limiting opening times of establishments until 1AM remains in place.

The Deputy Prime Minister and Minister for Health made the announcement while speaking at a press conference inaugurating the St Vincent De Paul long-geriatric centre, also addressed by Minister for Senior Citizens and Active Ageing, Michael Farrugia.

The Minister stressed that although the number of cases seems to have stabilised, experience has shown that the number of hospitalisations and people in the Intensive Therapy Unit (ITU) can rise weeks after an increase in community cases.

“The pandemic isn’t over,” he said.

He also pointed to comments recently made by the director general of the World Health Organisation, who said that the worst may be yet to come as he warned against a lowering of the guard.

He said that over two-thirds of all adults over 18 resident in Malta have taken the booster. Over the weekend, this should reach a target of 70 per cent.

In another significant lifting of current measures, fully vaccinated and boosted individuals in groups of no more than two people will no longer be required to wear a mask outside.

Mandatory mask-wearing remains in effect for those who have not taken the booster and those in groups of more than two people.

For now, only seated events may be organised. Standing events remain banned.

Another measure that will be lifted from Monday 17th January is the restriction on spectators at sport events. Spectators will be able to attend such events as long as they have a valid vaccine certificate, according to protocols that have yet to be announced.

On travel, the Minister announced a grace period for those Maltese residents who return to the country, who may now enter without a booster up to 1st February.

For those who are abroad for a long time, such as people studying or working away from Maltese shores, and who have therefore not had the opportunity to take the booster, this grace period will be extended indefinitely. He stressed that such individuals must register for the booster.

Additionally, those who have just recovered from COVID-19, and therefore must wait four weeks to get their booster shot, will be granted a six-week exemption from the new vaccine certificate rules.

Individuals who had a negative reaction to the first or second shot – an anyphilactic reaction – can obtain a certificate from their doctor and the Superintendence of Public Health saying there is an exception to them taking the booster.

“Those unable to take the booster for some reason will not be penalised and have their social life taken away,” he said.

He added that the health authorities will not be widening the places where a vaccine certificate will be required. “We will not make it mandatory across the board like Austria.”

Other exemptions include pregnant women in their first trimester, those aged 12-18, who are currently ineligible for the booster, and those under 12, who will be completely exempt.

From Monday, to facilitate uptake of the booster, eight walk-in clinics will also be opened across Malta and Gozo. There will also be mobile clinics going around different villages and towns.

“We ask those who haven’t been vaccinated to either register for an appointment or enter a walk-in clinic.”

Read next: Gozo-Malta route to get beefed up with new high speed ferry