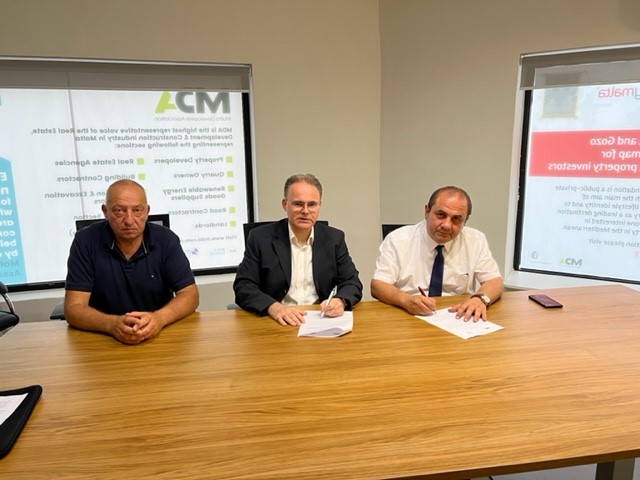 The Malta Developers Association has teamed up with the Malta Chamber of Geologists to call for the official recognition of geologists, saying that their expertise will help prevent “tragic accidents” related to excavation works.

The document, signed by MDA president Michael Stivala and Malta Chamber of Geologists president Peter Gatt, argues that the warranting of geologists will bring Malta in line with the practices and procedures of neighbouring EU countries and improve public safety in the construction industry.

The two organisations also called for the establishment of a National Geological Service/Survey which engages geologists to gather data on rock in the subsurface and the continental shelf.

“Malta remains the only European country without a Geological Service, which has resulted in developers and the public remaining unaware of the problems and hazards related to the ground where they live or want to develop,” the statement read.

“It is timely for the recognition of the profession of the geologist by the Malta Government,” it continued. “Geologists are the experts on rock and its excavation, which is an activity that presently is not assessed and monitored by geologists.”

The MDA and Chamber of Geologists suggest that the professional geologist holding a state warrant would be designated as the competent person to provide services on matters related to rock excavation, quarrying, on site and laboratory testing of rock materials, and mineral resources assessment and extraction.

The Geological Service would meanwhile use the gathered data to assist citizens on matters of public safety during rock excavation, assist in more sustainable use of Malta’s limited rock resources, and discover subsurface energy sources in Malta’s large continental shelf, the associations said.

The proposal is based on the 2020 Report of the Building Industry Technical Committee, and reflects the increased complexity of the modern construction and quarrying industries, which requires the recognition and involvement of more professions than those traditionally involved and recognised in the construction industry in Malta, according to the associations.

The modernisation of the industry also requires the introduction of practices and institutions already long established throughout the European Union, which need to be adopted in Malta, they said.

“It is now the responsibility of the government to safeguard public safety by recognising the profession of the geologist.”

There have been a number of high-profile incidents involving excavation in recent years. In April 2019, a building collapsed in Pietà. In June of the same year, a building collapsed in Mellieha, trapping a 77-year-old woman, who managed to escape with only slight injuries. Days later, another Pietà building suffered severe damage, with a large hole opening up in its side, leading to the evacuation of 10 families.

The incidents led to a temporary ban on excavation works, while a register of construction-related contractors was launched by the Building Regulation Office (now the Building & Construction Authority) together with the MDA, though this was deemed illegal by the Ombudsman, and has remained in limbo ever since.

A month prior to the Ombudsman’s decision, another house collapsed in Hamrun. This time, it was fatal, with 54-year-old Miriam Pace being found dead under the rubble of what was once her home.

The two architects involved were fined €8,000 and €10,000 respectively, though these were later revoked and replaced with a two-year and 15-month suspended prison sentence respectively. Technically, these constitute harsher sentences.

All these incidents were seemingly precipitated by excavation works.

In February 2021, Parliamentary Secretary for Construction Chris Agius indicated that new legislation mandating the licensing of contractors could be introduced by the end of that year.

Responding to questions sent by BusinessNow.mt earlier this year about any progress made in this regard, a spokesperson for the Parliamentary Secretary said, “Plans to enact the proposals in the Labour Party’s electoral manifesto are progressing.” No further comment was received.

Read next: Billionaire founder of outdoor clothing retailer Patagonia gives it all away