FULL TRANSCRIPT: Here’s everything FATF President Marcus Pleyer had to say about Malta 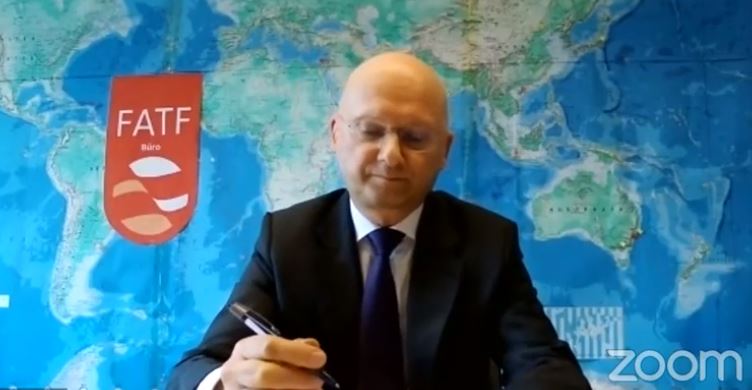 As Malta became the first European Union country to be receive ‘public identification’ of its deficiencies in the fight against money laundering and the financing of terrorism, it fell to Financial Action Task Force President Marcus Pleyer to give a media briefing on the topic.

Below is a full transcript of Mr Pleyer’s comments regarding Malta, including his replies to questions posed by Maltese and international journalists:

There has been a lot of reports about Malta in the media, and I am happy to update you on this.

Malta underwent a Mutual Evaluation Report in 2019. That’s the starting point. The final report outlined a large number of serious issues regarding risks in the country. These were significant strategic deficiencies. Since then, the FATF recognises that Malta has made good progress in a number of areas.

This includes issues concerning criminal tax and related money laundering cases. The FIAU needs to support law enforcement authorities to pursue and focus on these kinds of cases.

The Maltese authorities also need to ensure UBO info is accurate and up-to-date – this often relates to anonymous shell companies. If this information regarding the true owners of companies is found to be inaccurate, authorities need to apply dissuasive sanctions.

The FATF is clear that there remain serious weaknesses and areas that must be addressed.

It is crucial for Malta to ensure systems are in place that are strong enough to address ML and TF and serious organised crime.

The authorities must not downplay the importance of these measures. That is why Malta is going on the grey list as a result of the remaining strategic deficiencies.

The Maltese Government has given high level political commitment to continue to make the necessary changes. I urge them to do so.

Of course I have followed media news, and I know that every country that moves on the grey list is not very happy with this, but in the end the Government of Malta gave its clear political commitment to work with the FATF to address all its deficiencies, and this is just a signal for cooperation.

I am very thankful for this commitment of the Maltese Government, and it will turn out that in the long term this helps the country improve its anti money-laundering systems which then will make sure the country has a strong rule of law and sustainable and fair economic growth and social cohesion, social peace. If you improve the AML system it has a lot of advantages and it strengthens the integrity of your financial system.

Malta passed its technical evaluaton by Moneyval earlier this year. This has baffled a lot of people. What were the concrete reasons that underpinned the FATF’s decision to put Malta on the grey list. Perhaps you can provide some concrete examples of where these weaknesses are. And when do you expect Malta to satisfy requirements. Is there a timetable? – Kurt Sansone

I am very happy for this question because I saw these uninformed discussions in the media about Moneyval and FATF and ‘how can this be?’.

So the effectiveness is what the FATF looked at, in contrast to only looking at the technical compliance like Moneyval did. And here were the deficiencies.

The deficiencies were in the area of beneficial ownership transparency and in the area of financial intelligence, especially when it comes to tax crimes.

Each country that goes on the grey list gets an action plan with timelines so that Malta knows when to comply, when to address which deficiency.

Mr Pleyer, so as you know there’s been a lot of discussion about the decision by the FATF to put the island on the grey list. First of all, the Prime Minister has gone on record to say that the decision is unjust and that it’s unfair. There’s also been talk of ulterior political motives swaying the FATF’s decision against the country. I’d like your response to that. I’d also like to ask you if you trust the current Government to get Malta out of the grey list or if this move is a kind of signal to the maltese electorate? – Tim Diacono

To your last question, the Government of Malta gave a clear political commitment to the FATF and I completely rely on this commitment.

On your first question, I can only say what I’ve already said. There remain serious weaknesses and areas of work that Malta must address. It’s crucial for Malta to make sure that systems are in palce to prevent money laundering and terrorism financing.

As I said at the beginning, the starting point is the Mutual Evaluation of Malta in 2019, which is a very robust, long process that takes 12 or 14 months since Malta was assessed.

The result was not a good one. Malta failed in nine of 11 items. Effectiveness items, to contrast with the Moneyval assessment.

So Malta was put on the track towards greylisting. We always give countries an observation time, where they have time to address all the deficiencies. This is usually a year, but due to COVID-19 we extended this to one and a half years.

But members were clear in this plenary that Malta had not addressed all the deficiencies, and for that reason Malta stays on the track and is now being listed on our grey list.

We know Malta was one of the first jurisdictions with a robust cryptocurrency and virtual assets regime. There have been a lot of reports on the media recently saying a lot of money has gone through the island in the form of cryptocurrency transations. I just wondered, is Malta’s nascent crypto regime anything to do with it being added to the grey list or is it compeltely unrelated? – Ian Allison

We just introduced our new standards on virtual assets in 2019 – after the MER for Malta. We are now in the process of helping countries and the private sector to implement these new standards.

For this reason – since these are very new standards of the FATF – we will be issuing guidance for countries in October – this was not an issue in Malta’s mutual evaluation.

The Maltese PM has labelled decision as unjust. The Employers’ Association also said it was a devastating blow to the country. Would you be able to say if you think this will have a negative effect on the Maltese economy and any potential ramifications for the Maltese people? – Elizabeth Hirst

I don’t think I can answer this question on the economic impact. I think there was some IMF paper where you can look at the effects of greylisting of countries, so I would refer you to that one.

I can only say that in the medium to long term, if you have a robust AML system, it helps with fair competiton, it helps the integrity and reputation of a financial system, so in the end it helps and improves the fair economic growth of the country. The long term effects are of course positive.

Maybe I can also make clear that being on the grey list doesn’t mean that this has any legal consequences, as opposed to the black listing. So this is just a public identification that this country has deficiencies, but there are no legal repercussions.

You mentioned that a timeline was sent to the Maltese Government. Could you outline it? – Kevin Schembri Orland

These timelines are a matter between each country and the FATF. They are confidential.

Read next: ‘Malta firmly believes it does not deserve to be subject to increased monitoring’