Joe Biden sworn in as 46th President of the United States

The President called for unity and healing in his inauguration speech 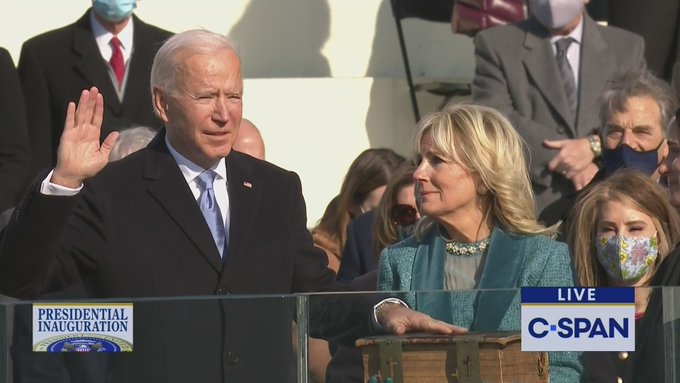 Joe Biden has been sworn in as US president at the US Capitol.

At the ceremony, which was guarded by some 25,000 troops, President Biden addressed a conspicuously small audience that included Barack and Michelle Obama, Bill and Hillary Clinton and other previous presidents, among others.

In his passionate inauguration speech, President Biden called for unity and healing, in the face of “this winter of peril.”

He has vowed to “restore the soul of the future of America”, which “requires the most elusive of all things in a democracy: Unity.”

Speaking from the spot etched into the Nation’s collective consciousness when it was overrun during the Capitol Hill riots, he reaffirmed that democracy has prevailed, suggesting that ” America has been tested and it has risen to the challenge.”

President Biden also called for America’s return as a global leader, saying “we will repair our alliances…we will lead not by the example of our power but the power of our example.”

He ended his speech by looking to the future, announcing, “with purpose and resolve, we turn to those tasks of our time.”

In his first weeks in office, he will face a nation in the midst of a health disaster, as the United States records 185,000 new COVID cases a day, and an economic one, as businesses and the labour market struggle to adapt to restrictions.

One of President Biden’s most pressing goals is to provide pandemic relief. He is said to want 100 million COVID vaccine doses to be delivered in his first 100 days.

Also on the agenda is his pledge to rejoin the World Health Organization, and sweeping economic measures, including rent and mortgage relief, and a $1.9 trillion (€1.6 trillion) economic stimulus package.