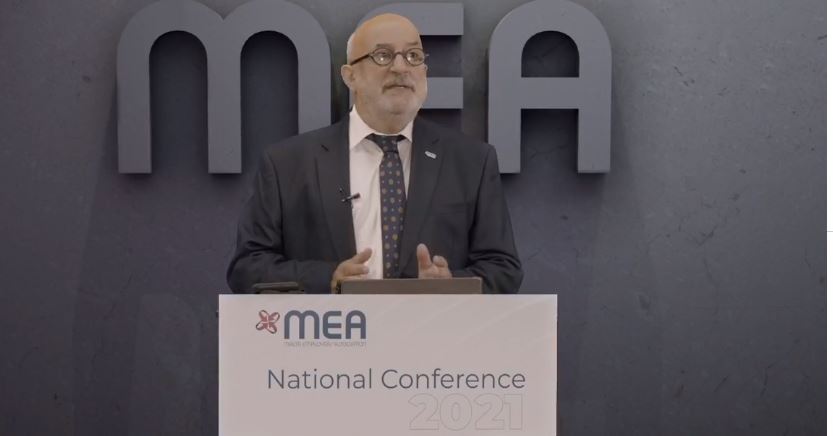 In a speech challenging various parts of Malta’s current economic model, Joseph Farrugia, Director General of the Malta Employers’ Association, took aim at construction and the “drain on human resources” posed by the public sector, as he concluded that public good must take precendence over private good to achieve a truly sustainable economy.

Mr Farrugia was speaking at the union’s conference on Balancing Sustainable Economic Growth with Quality of Life, where he insisted that Malta needs to face up to the realities of being a small, densely populated country.

The topic of construction was a common thread through many of Mr Farrugia’s observations, as he remarked that despite the construction boom taking place over the last years, the share of construction to the country’s gross value added “surprisingly” remained at a constant five per cent between 2010 and 2019, pointing out that this could be indicative of increased black market activity in the sector.

He also linked it to tourism, alluding to the long-held goal of attracting tourists with more purchasing power to shift the focus from numbers to quality tourism.

“There has to be synergy between the various areas of the economy,” he said, “but what we are seeing is that construction is potentially clashing with the aim to attract high-value visitors.”

He shared a quotation from Julia Camilleri, an activist with the recently set up NGO Għawdix.

“It’s as though Malta – including Gozo – is doing well, in a lot of areas … but at the same time, our daily life is full of frustration. It’s full of complaining. And no one wants to live like this. No one wants to live, moving from one construction site to another,” said the young Gozitan.

Mr Farrugia however made it clear that the blame for the widespread perception of overdevelopment does not rest solely on deevlopers’ shoulders.

“We must remember that the low interest rate environment has led many to transform their financial assets into property,” he said. “The supply reflects the demand.”

“As a small economy which is quite resilient and quite diversified, is it time to consider whether there is a need to shift the distribution of value added between sectors?” he asked.

“We need to see how the distribution of our economic growth should be in the coming years, also to give direction to our economy, to shift into areas which can reconcile growth and wellbeing.”

He also questioned whether it was time to invest more in agriculture, with a thought to maintaining the island’s food security.

Mr Farrugia pointed out that inequality, measured by the GINI coefficient, while moderate by global standards, had increased in recent years.

He noted that as the economy grew, some activities saw higher increases than others, and incomes did not rise proportionally, with some increasing dramatically and others stagnating for years.

He claimed that people’s purchasing power had decreased, and reflected that the retail price index may not accurately reflect how purchasing power is being eroded, with factors like rent and the price of property being major reasons for the phenomenon.

“Obviously, employers cannot subsidise rent,” said Mr Farrugia. “Changes in wages can reflect changes in productivity, but this has also been regressing.”

He said that the country’s work ethic, long a major factor in companies’ decision to invest in Malta, was deteriorating, as have governance and reputation.

“I must point out,” he said, “that we really need to rationalise our human resources. It is a limited resource, and we cannot have underutilisation or misallocation.”

“For example,” he continued, “there is a well-known shortage of nurses, as they feel a sense of frustration at being overworked and underpaid. On the other hand, Ministers have full time personal chauffeurs. Could these people be employed more productively?”

“Meanwhile, we must admit, hand on heart, that our international reputation has suffered over the years,” he said.

“We need to re-establish Malta as a country one can do business in.”

Closing, he said that the concept of wellbeing needs to take centre stage in a restructuring at national, sectoral and enterprise level.

“We need to accept that, sometimes, in a small, densely populated country, the public good needs to take precedence over the private good.”

“We need to have a collective sense of wellbeing,” he concluded.

Read next: As Malta reopens to Americans, Viking prepares to launch ‘Welcome Back’ voyages from Valletta