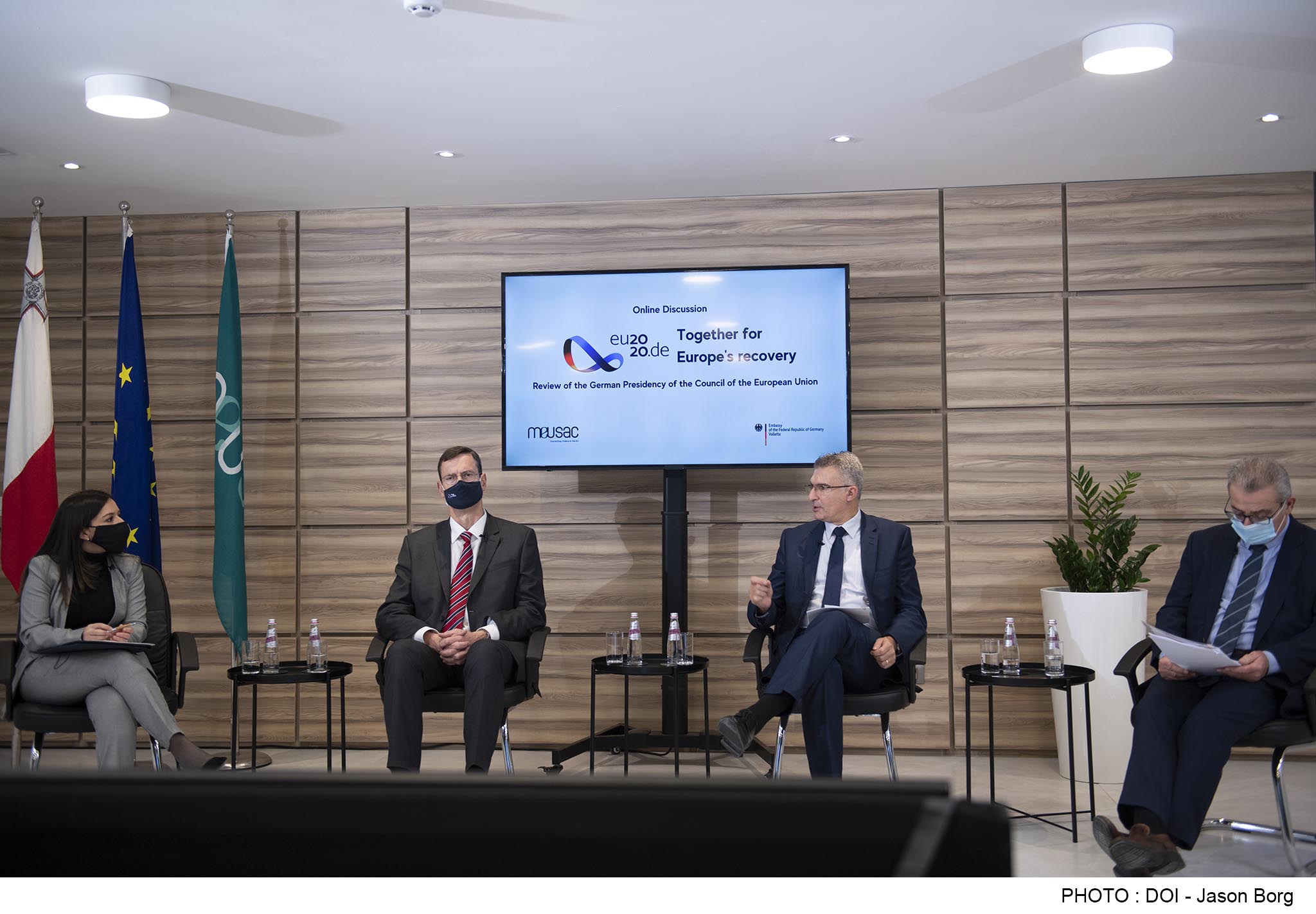 Minister Carmelo Abela has affirmed the need for a speedy transition to the green economy, which is essential in maintaining economic growth and the creation of new jobs in the post-pandemic period

“Transitioning quickly into the green economy is essential and in Malta’s interest as the country stands to gain in terms of opportunities for growth and the creation of new and high-quality jobs.”

Minister Abela’s comments were made during his participation in an online discussion hosted by MEUSAC and the Embassy of the Federal Republic of Germany in Malta, organised on the occasion of the end of the German Presidency of the Council of the European Union. The discussion reviewed the Presidency’s role at a time of decisive actions by the European Union.

The main topics for discussion were the EU multi-annual financial framework 2021-2027, the Recovery Package, the Climate targets for 2030 and Brexit in the context of the pandemic and the EU’s response for these unprecedented times and challenges. Apart from Minister Abela, Minister for Foreign and European Affairs, Evarist Bartolo, and the Ambassador of the Federal Republic of Germany to Malta, Walter Haßmann, were also in attendance.

During the discussion moderated by Head of MEUSAC Mandy Falzon, Minister Abela said that the transition to the green economy has to come with Government, social partners, civil society and the private sector working in tandem. This would lead to the creation of greener and better jobs beneficial for employers, employees and the country and would also help Malta’s turnaround following the COVID-19 pandemic.

Minister Abela added that climate and environmental challenges must be turned into opportunities across all policy areas and making the transition just and inclusive for all. He mentioned how the 2021 Budget includes 377 measures spread over various sectors that focus mainly on the environment to enable Malta to transition towards a green economy. He also touched upon the Maltese Government’s efforts in introducing simple but effective measures to improve the work-life balance.

He added that the current crisis has particularly hit sectors with a higher share of low-wage workers. Ensuring a decent living for workers and reducing in-work poverty is not only important during the crisis but also essential for a sustainable and inclusive economic recovery, said Minister Abela, whilst also noting that the Directive increases the coverage of collective bargaining.

Minister for Foreign and European Affairs Evarist Bartolo stressed that despite repeated appeals, a lot more needs to be done to overcome the root causes of irregular migration.

Minister Bartolo called upon all EU Member States to regroup and work towards genuine progress on the solidarity mechanism and to seriously address the root causes. “This is also a matter of trade – unless we agree to fairer trade deals we cannot expect sending and transit countries to create jobs and wealth within their territories”.

In this context, Minister Bartolo reiterated Malta’s commitment to work with all stakeholders not only to control migratory flows, but to fight organized crime syndicates dealing in human smuggling and violating universal human rights. Promoting the culture of human rights remains crucial and central to all our efforts, he concluded.

Ambassador Haßmann stated that “After an eventful presidency, we are proud to have made progress in quite a number of important issues, based on solidarity and a lot of hard work by all of us in the EU. Now, we are pleased to hand over with confidence to our Portuguese colleagues, partners in the trio presidency together with Slovenia.”

Non-resident Ambassadors to Malta for Portugal and Slovenia Pedro Nuno de Abreu e Melo Bártolo and Tomaž Kunstelj respectively also participated in the discussion as their countries follow Germany in taking over the rotating Presidency next year.

The discussion included the virtual participation of several representatives of diplomatic missions in Malta and abroad, civil society representatives, government officials and members of the public.

Read next: Moratorium on loan repayments to extend into 2021