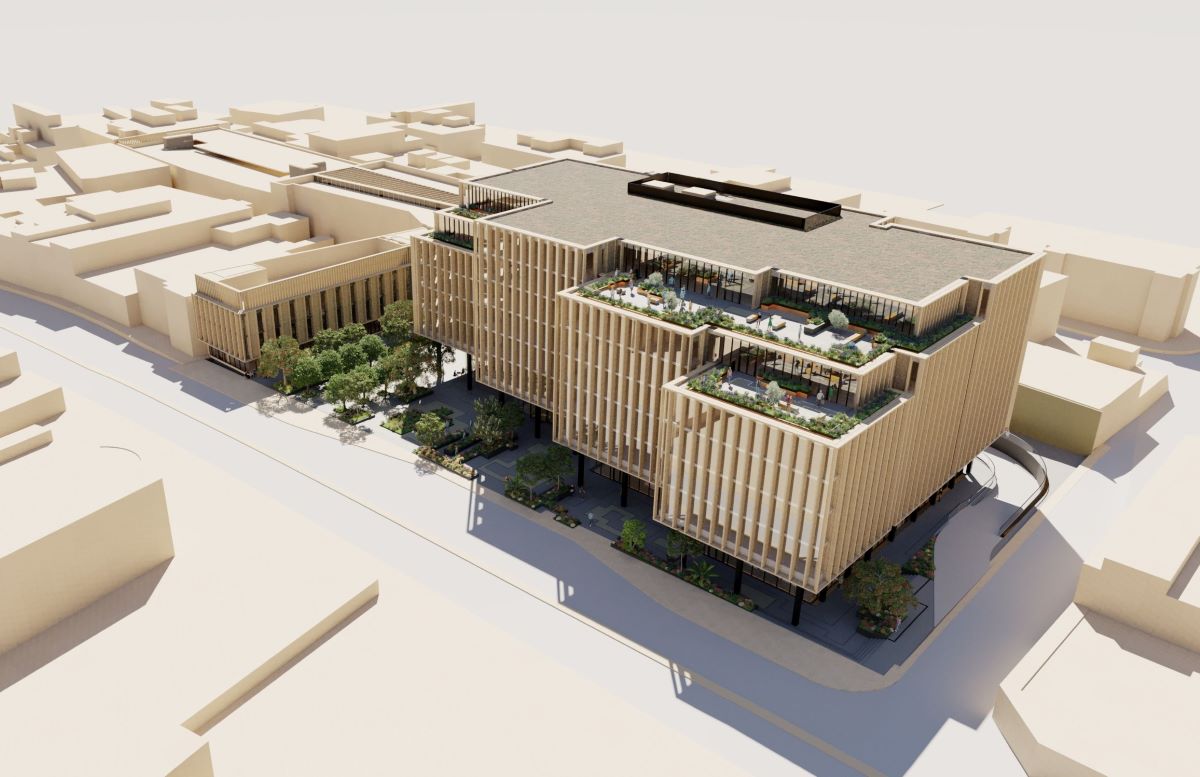 The proposed redevelopment of Debono Group’s Toyota showroom in Żebbuġ has been downscaled and now features two blocks, with the maximum height of the main one now set at eight floors, down from the original 11.

The block will also feature a terraced approach, so parts of it will be significantly lower in height.

The original proposal, submitted in 2019 by Michael Debono Group subsidiary Rohan Arch Limited (RAL), attracted considerable controversy, with over 2,600 objectors and the Local Council coming out against the project.

The new application, submitted to the Planning Authority on Tuesday (today), describe the development as a “landmark project” which will include Grade ‘A’ workspaces for knowledge-intensive service providers in the central region of Malta.

“This will be supported and complemented with retail, food and beverage, leisure uses as well as local amenities surrounded by extensive open public spaces to create a new vibrant destination for all. The project will also include a multi-storey car park, which will be a first in the area.”

The developers estimate that, once complete, the project will generate employment opportunities for around 1,300 people, with an investment of over €55 million.

There are no plans for any residential development and the project will be on property that is already built up and committed.

It will occupy a footprint area of just under 11,000 square metres, out of which more than 4,000 square metres will be car-free public open spaces. These will include community facilities including relaxation areas, green areas, and a main plaza.

Luke Coppini, CEO for the group’s property arm said: “We firmly believe that this project is a well-needed enhancement to the quality of life of the Żebbuġ community and will add a new destination that can fuel the regeneration of the entire Ħal Mula area, predominantly designated as a commercial and industrial zone. This project will be a truly unique business address in the Maltese landscape setting new levels for development and place, making it accessible for all.”

He added that the over the past two years RAL has sought the feedback and inputs from various stakeholders and has taken on a number of recommendations on board to improve the various aspects of the project including building fabric, elevations, terracing, parking, accessibility and landscaping amongst others. One of the key elements is that the main block will not be in a monolith form, but will feature a terraced approach to the different parts of the building.

“We remain committed to keep all stakeholders, including the locality of Ħaż-Żebbuġ and its residents, updated and consulted on this project,” said Mr Coppini.

He said that the project will be based on strict sustainability principles and will seek to blend the design and aesthetic aspect with the local architecture in terms of choice and colour of materials. Landscaping will be a key element of the project to ensure sustainable green spaces for the benefit of the community.

The Debono Group has opted to shift the parking from underground to above ground and thus reduce excavation and dumping by some 65%, and significantly reduce the construction period, therefore generating a positive environmental impact.

The development, even in view of local regulations, will be completely accessible to people with disabilities and with mobility issues.