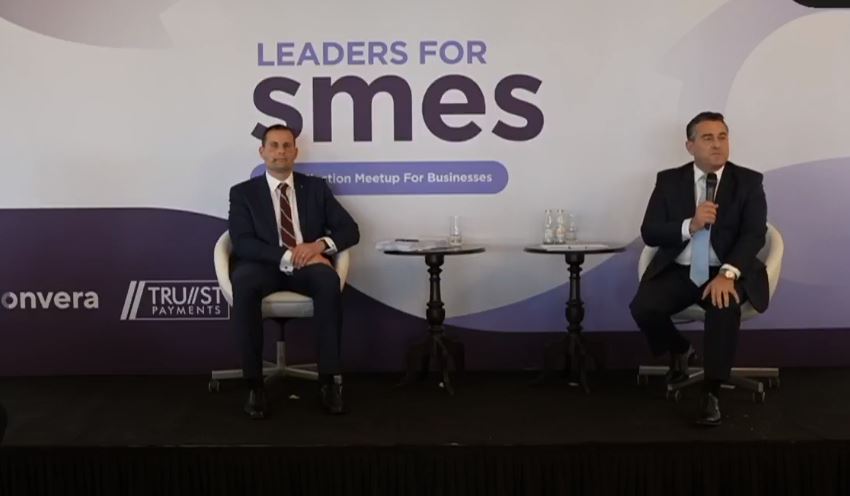 Prime Minister Robert Abela and Leader of the Opposition Bernard Grech got a chance to discuss their economic proposals in an event that saw both replay their campaigns’ main talking points while avoiding the typical jibes and snark expected when facing each other on the campaign trail.

The leaders of the two major parties addressed Malta’s business community on Monday at an event organised by the Chamber of SMEs, which opened with statements by the organisation chairman Paul Abela and CEO Abigail Agius Mamo.

Mr Abela opened by noting that the international business environment continues to be challenging, with the supply chain crisis caused by the COVID-19 pandemic causing steep price increases which are only aggravated by Russia’s invasion of Ukraine.

“On top of this,” he said, “we have two big banks that no one can stand up to,” in line with the lobby group’s heavy criticism of the banking sector over the last months. “Let us be clear. Closing your bank account is tantamount to closing your business. If you have employees and suppliers to pay, what can you do? You’re entirely at their mercy.”

He lamented that the Malta Competition and Consumer Affairs Authority (MCCAA) has “no teeth” when dealing with banks, sharply criticising also the lack of know-how within the Authority with reference to one employee who did not know what a sanction letter is.

While acknowledging the importance of tax deferrals, he also warned against a universal approach to their eventual payment, bringing the example of businesses depending on mass events, which have not yet restarted operations.

Ms Agius Mamo presented the SME Chamber’s proposals for the coming years, among which a renegotiation of the terms of state aid and a revision of public procurement rules featured prominently.

“Malta cannot depend on its own market,” she said. “We need help to be able to compete as a country.”

She added that many businesses feel like they are wasting their time when bidding for supposedly open tenders only to get the feeling that they were tailored for particular persons. Similarly, she called for a much higher level of accountability on direct orders, and said the role of the Contracts Department should be expanded beyond its current “very limited role”.

Leader of the Labour Party

Prime Minister Abela began by referring to the war in Ukraine, saying “it is impossible to talk about the business agenda without reflecting on what is happening in Europe”. He said his Labour administration had proven itself to have the skill and experience to navigate crises without resorting to populist measures.

Dr Abela touted the calibre of his Cabinet members and the unity between them, saying that these were crucial to the country’s successful response to the COVID-19 pandemic.

He reminded listeners that initial projections envisioned economic stagnation and over 50,000 unemployed. “If we didn’t take action, these fears would have materialised, and instead of talking about continuing growth we would be talking about managing crisis.”

He pointed to the PL proposal to lower the corporate tax rate to 25 per cent, saying this would apply to all businesses – “no ifs or buts” – leading to reinvestment and the employment of more workers or better conditions, including higher wages, for existing ones.

The Prime Minister said he admires the resilience and courage of private businesses in continuing to invest during the uncertainty caused by the pandemic, bringing up the PL’s proposal to fork out 30 per cent of investment in fixed capital, including intellectual property. On top of this, reinvested profits will benefit from a full refund.

He also agreed with Chamber of SMEs CEO Abigail Agius Mamo in her criticism of the bureaucratic burdens imposed by banks, saying he finds it “difficult to understand”, and highlighted his party’s proposals to introduce a credit review office to mediate and ease the granting of commercial loans.

Leader of the Nationalist Party

For his part, Leader of the Opposition Grech said the PN issues “serious, mature, credible words, not absolutist statements”, countering Prime Minister Abela’s narrative on pandemic performance by pointing out that the economy’s resilience was thanks to the economic sectors created by the PN.

He continued to lean heavily into the party’s pledge to set up 10 new economic sectors by partnering with private enterprise to take out 50 per cent of any investment in these sectors.

Insisting that the PN remains “in constant dialogue” with businesses, he said the deferral of tax, VAT and NI during the pandemic must not come to be a burden in the immediate future by extending the repayment term to eight years.

He said the Government cannot be trusted when speaking of its economic track record, saying that nine years of Labour had resulted in a larger bureaucratic burden.

“Businesses tell me they have had to employ compliance specialists to be in line with the new rules,” he said. “You tell me if that’s a help or if it’s a burden,” he asked pointedly, describing the country’s reputation as “the key, not only for the opportunity to continue growing, but also to operate without long shadows on your companies”.

He blasted the Prime Minister for making no mention of the common concern about an unequal playing field, and said that direct orders and advertisement should not be used as “instruments of control”.

“We are in a situation where people are scared of responding to surveys, criticising Government, or talking to the Opposition. Is that what we want? Do we want another five years of submission, or shall we open the door to liberty once again? Where you feel that you can speak and criticise Government without fear of repercussions? That your permits, licences, advertising or business will get taken away?”

Dr Grech concluded by giving his word that a new PN Government would not increase taxes, NI or VAT, saying: “We anticipate and confidently estimate that the Government’s income will continue increasing due to economic growth.”