The owners of the 200,000-tonne cargo ship say strong wind forced it to run aground 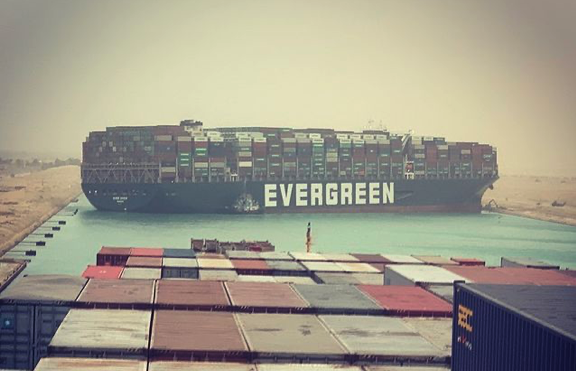 On Wednesday morning, 400-meter-long vessel ran aground sideways in Egypt’s Suez Canal, causing major backlogs around what is one of the world’s busiest waterways.

Speaking to BusinessNow.mt, Godwin Xerri, who sits on the board of the Malta Maritime Forum and the board of directors at the Worldwide Ship Agents Association, explained the ship’s size, as well as its precarious position lodged in the sand banks of the canal, make moving it particularly difficult.

With a length “the equivalent of four football fields”, it is “literally blocking the canal”, making it even more difficult to manoeuvre the ship, he explained. “If it was in a different position, where it could be pulled astern, it would make things easier”, he said.

Tugboats and land-based diggers are working to release it, and allow traffic to continue. In the meantime canal authorities have reopened an older channel, to attempt to relieve some of the pressure on the blockage.

The owners of the 200,000-tonne cargo ship, “Ever Given”, which is registered in Panama, say it ran aground after being hit by strong winds.

Canal authorities concur. In a statement issued on Wednesday, the Suez Canal Authority detailed 40-knot winds and a sandstorm, which caused hazardous conditions for navigation and low visibility.

Taking to Instagram, Julianne Conna, who is on a ship just behind the grounded vessel predicted she “might be [there] for a little bit”.

The Ever Given, bound for the Netherlands, was travelling northwards through the canal from China. It was built in 2018 and is operated by Taiwanese company “Evergreen Marine”.

The ship is reported to have run aground at around 06:40 am (CET) on Tuesday. Its technical manager, Bernhard Schulte Shipmanagement, has said an investigation is underway.

The blockage has seen a build-up of traffic on both sides of the strangled waterway, and experts have expressed fears that the operation to free the ship could take days.

A blockage on the Suez-canal could cause major ramifications for world international trade.

The 190km long canal, which acts as a gateway to the Mediterranean and thus Europe for shipping from Asia sees around 10 per cent of global trade pass through it.

Opened in 1869, and initially majority-owned by British and French stakeholders, the canal is said to play a vital role, not just for trade, but for military strategy. When Egyptian President Gamal Abdel Nassar nationalised it in 1956, Britain and France went to war to reclaim it, though they were ultimately compelled by US-led international pressure to withdraw their forces.

It was expanded in 2015 to allow ships to travel in both directions along it simultaneously, though only along sections of the waterway.

Asked about the possible impact of the Suez’s blockage on Malta, Mr Xerri explained “all the trade with the Far East comes through the Mediterranean, including Malta, has to come through the Suez Canal.”

Ships travelling to the Far East region, roughly speaking make up 30 per cent of Malta’s domestic trade, he said.

Aside from trade directly to and from Malta, “all the ships belonging to lines that use Malta Freeport as their base for transhipment” could be disrupted, risking a “domino effect” that could prove damaging to the nation’s port, he said.

“The sooner the ship is freed, and travel can resume, the sooner we can all sleep easy”, he explained.