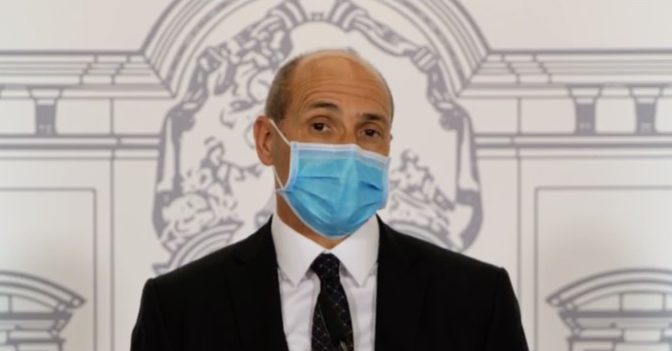 Deputy Prime Minister and Health Minister Chris Fearne has announced that new COVID preventative measures could be introduced should this latest spike persist.

He pointed out Malta’s latest record of daily COVID increases, registered this morning at 224 new cases.

The Deputy Prime Minister said that this latest spike could be due to three reasons: a lack of discipline in terms of socialising during the holiday period, the drop in temperature Malta has experienced in recent days (as the coronavirus has been determined to be a seasonal virus) and lastly, the new variant that appears to have originated in the United Kingdom but has spread across Europe.

Minister Fearne said that should the reason behind the latest spike be related to holiday period, the numbers should go down.

He added however, that if the spike persists and therefore the reason behind it appears to be the drop in temperature or the new COVID variant, which should not have a bearing on the effectiveness on the COVID vaccine, is not known to be more deadly but has a higher transmission rate, the Government would announce further preventative measures “to protect the population and Malta’s hospitals”.

“We are currently analysing which are the most important factors that are resulting in an increase in new cases. If it seems that the holiday season was the biggest contributing factor, the spread should go down in the coming weeks.

“If it is seasonality or the new variant, in this coming week we could be constrained to take the necessary measures to protect our population and ensure that our hospitals continue to function and keep up.

“If it is needed, we will take up new measures and will announce them in the coming days,” Minister Fearne said.

When asked directly by the Times of Malta to clear what sort of measures the authorities are contemplating on introducing should the COVID spike persist, Minister Fearne did not divulge, but instead said the authorities will do what is necessary to protect its citizens and residents.

He said that with the current Pfizer vaccine, and the Moderna vaccine which the European Medicines Agency (EMA) has just approved, by May authorities would have vaccinated all vulnerable people in Malta, and by the end of summer, the aim is for heard immunity to be achieved.

He said this is a positive sign for normal and commercial life to potentially return in 2021, and should be a sign of hope for tourism to return by the summer.

“The news that we are getting is that the next few hours there should be an answer [the vaccine has since been approved]. If it is approved then the Moderna vaccine will be the second one available for Maltese residents, which means that Moderna and Pfizer vaccines will total for this year 770,000  doses.”

He said that another 1.7 million doses could potentially be available to Maltese residents once other companies also get approval from the EMA.

Several pharmaceutical companies are still awaiting approval by the EU Medicines Agency, including AstraZeneca and CureVac.

“This means that our rollout, which has been going out for the past few weeks, will continue to go on at the planned pace. We plan to have all vulnerable people and front liners vaccinated by the end of May, and by mid-May, we will send notification for the rest of the population for the weeks and months after.”

Read next: Malta one of only three EU-27 nations to record annual growth in industrial producer prices