WATCH: Quarantine cut to one week for vaccinated people in contact with COVID-19 case 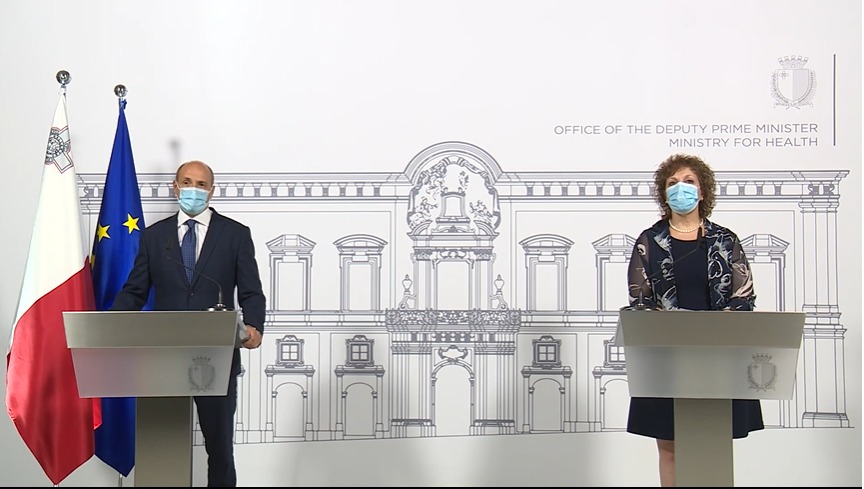 Fully vaccinated people who come into contact with a positive case will from 16th August only need to self-isolate for one week, down from 14 days, Minister for Health Chris Fearne announced on Thursday.

On the seventh day, such persons will be swabbed, and on the eighth day that person can exit quarantine

This latest softening of restrictions, the Minister insisted, is due to the high uptake of vaccinations.

Booster shot to be given to immuno-comprised persons and the elderly from mid-September.

The health authorities will not be allowing standing events from 16th August as planned, but have increased the cluster sizes for seated events. For more detailed information, click here.

The Delta variant is causing a number of cases, and the moving daily average over the past seven days is 85 cases.

Since there were over 200 recoveries, the number of active cases is now 1,206.

The absolute majority of new cases, from last week’s data, are related to the Delta variant at 95 per cent while the 5 per cent is the Brazilian variant

The countries where the vaccine has not reached majority levels across the population have led to serious situations, especially within the health systems.

In Malta, on the other hand, 88 per cent of the adult population has had at least one dose, with 86 per cent being fully vaccinated.

Minister Fearne said that minutes before the start of the press conference, conference, an 88-year-old not receiving care at Mater Dei died after testing positive a fortnight ago. Details on this person are still unknown.

Persons receiving care at Mater Dei who are positive with COVID-19 number 35, with four of these in ITU.

Minister Fearne said the authorities are currently studying levels of immunity within the community.

He said that one must bear in mind there are members within society who have been vaccinated for six months now. He added that from observations, it would seem that those with no immune system conditions have not lost significant levels of immunity against COVID despite the duration of time since taking the second dose and that is why a booster shot across Malta is not being recommended at this stage.

Minister Fearne said that following discussions with experts, the use of a third jab, otherwise know as a booster shot, has been decided for two categories of persons.

Those with compromised immunity, due to an immuno-suppressive illness or for other reasons, will receive a letter from the authorities with an appointment for the third shot.

For those who are extra vulnerable to suffering should they contract the virus, despite being fully vaccinated, a booster is also being recommended. To this end, the authorities will be visiting homes for the elderly to provide residents with a booster shot.

The boosters will be provided from mid-September.

Read next: ‘Standing events? Certainly not from 16th August’ – Minister for Health