When completed, it will be the largest man-made structure in space 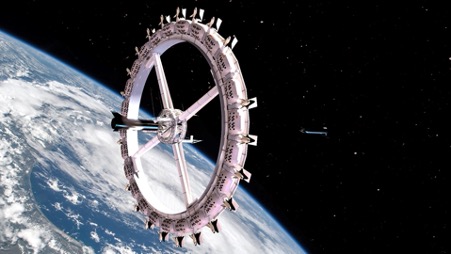 A California-based start-up, Orbital Assembly Corporation, has announced plans to commence construction on the world’s first space hotel in 2025, which it says will orbit at 97 degrees and an elevation of 500 to 550 km.

Set inside the Voyager Station, which itself aims to be the first commercial space station operating with artificial gravity, the planned hotel will host restaurants, a cinema, spa, and rooms for 400 people.

Orbital Assembly describes itself as the world’s first large-scale construction company, is centred on the colonisation of space. It recently completed its latest funding round, over which it says it raised $1 million (€830,000).

It was established by a team from The Gateway Foundation in 2018 as a way to make its plans for the jumpstarting and sustaining of a robust and thriving construction industry a reality.

The idea for a cruise ship-style hotel floating above the Earth’s atmosphere was first released by the Gateway Foundation in 2019. The concept was initially comprised of 24 modules connected by elevator shafts that make a rotating wheel orbiting the Earth.

Computer-generated images of the planned interior display an aesthetic that will be not altogether different from its Earth-based peers – just with rather special views.

The physics of the station are said to be based on designs produced in 1950 by Wernher von Braun, a German aerospace engineer who pioneered rocket technology in Germany and then the United States.

When completed, the station is expected to be the largest man-made structure in space.