37 years in the red – the economy of Malta’s metro

The total cost is expected to be recouped after 37 years 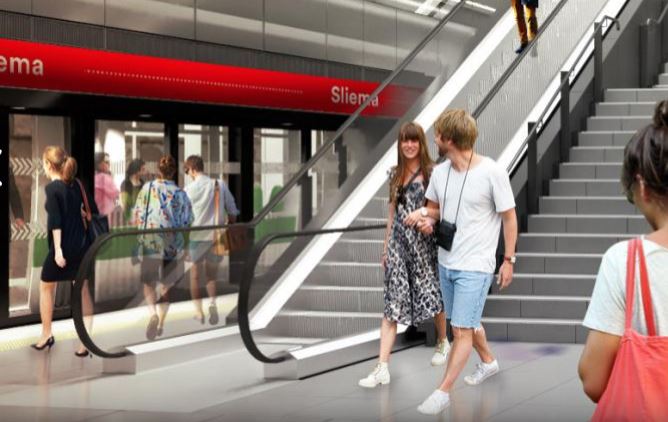 The proposed Malta Metro’s estimated cost of €6.2 billion, almost two thirds of which would be related to infrastructure, is expected to be recouped after 37 years, saving 25,000 tonnes of CO2 annually through a network that would see seven to eight trains go through each station every hour, each with a capacity for 300 passengers.

The details emerge from the strategic business case study for the metro system, published this morning, which, along with a feasibility study, will inform the public discussion going forward.

The system, says consulting firm Arup, would save around 12 minutes of journey time on key routes, and prevent 263 road accidents, one of which fatal.

It is also expected to bear some five million tourist trips per annum.

Benefits include reduced journey times and improved journey time reliability for metro users and car users as a result of reduced congestion, and improvements to the ambience and health from reduced negative externalities from car use (pollution and noise).

Congestion is in fact a major burden to Maltese businesses, with the average traffic delay for kilometre travelled almost three times the EU average.

The project would generate improvements to the public realm, better walkability to public transport and new public spaces, and more health benefits from increased active travel.

Land values can be expected to rise should the project see the green light, while local economic impacts can be generated through the provision of new commercial spaces.

The construction sector can also look forward to positive short-term impacts, as the construction of the metro would provide jobs and opportunities for upskilling and training.

Finally, the metro could provide greater access to jobs and leisure activities for local residents.

The catchment area for the metro includes 184,000 people within a 15 minute walk to and from the stations, while current bus services would be reformed to better align with the underground system, with a feeder bus service network ensuring maximum accessibility. The catchment area also includes the places of work for 88,000 employees, some 45 per cent of all workers in the country.

Metro vs the alternatives

An underground light metro option scores the highest across all categories except for archaeology and cultural heritage, natural environment and capital and operating costs.

It is expected to achieve, the study says, the highest improvement in public transport quality, minimise impact on existing networks and the landscape, achieve the greatest public transport and land-use integration, maximise the catchment of the population with access to the new transit system, and improve overall transport user safety.

The scheme would be delivered in phases. The proposed Phase 1 includes the red line from Naxxar to Pembroke / Sliema along with a spur to Valletta taking in pat of the blue line and green line. Phase 2 of the delivery plan is to bring the underground light metro network to serve the south harbour district and in particular Malta International Airport. Finally, the delivery of Phase 3 would complete the central loop and provide improved flexibility.

The costs and benefits

Combining the costs and benefits over the 60-year appraisal, the results show a Benefit-Cost Ratio of 1.4, suggesting that benefits outstrip the costs.

The almost €4 billion in infrastructure costs are further broken down in another table, which shows that tunneling alone makes up over a third of these costs.

The scheme would have high costs in the early years, but the benefits then outweigh the costs in individual years after it opens, meaning that in economic terms the investment would “break even” after 37 years.

These quantified benefits are largely made up of time savings, although Arup points out that the benefits of increased attractiveness to tourism and FDI are not included.

Annual operating costs are meanwhile estimated to amount to some €63 million a year.