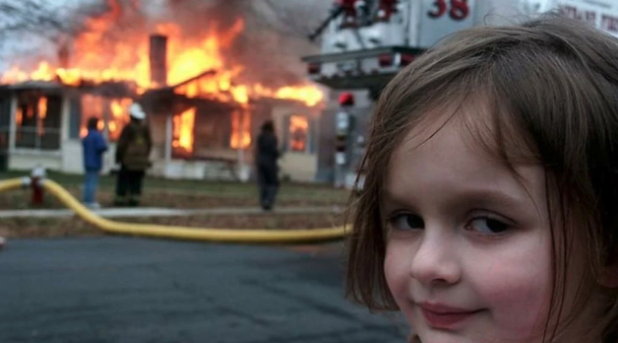 Zöe Roth, best known as “Disaster Girl” for a viral image taken by her father in 2005 capturing her smirking at the camera while a house burns in the background, has sold the original copy of the photo as a non-fungible token (NFT) for 180 Ether, worth around €410,000.

Becoming the latest internet star to leverage the boom in cryptocurrency-based artwork, the 21-year-old tells the New York Times that she’ll use the money to pay off her student loans and to donate to charity.

She also retains the copyright to the image and will make a 10 per cent portion any future sales of the NFT.

Ms Roth was four when her father took the iconic photo (against the backdrop of local firefighters putting out a planned, controlled fire).

Since then, she has seen the photo enter the internet’s collective consciousness, but till the recent explosion in NFT technology, did not have any real way to monetise the fame.

Explaining to the Raleigh News & Observer what gave her the idea to sell it as an NFT, she says that someone emailed her the suggestion.

With her family, she researched the process, retained a lawyer and manager, and launched the auction – before watching it erupt into six figures while seating customers at her part-time restaurant job.

NFTs, which are a unique digital certificate proving ownership of a piece of digital media, have recently exploded in both usage and attention.

In March, two massive transactions received international attention – the selling of Twitter founder Jack Dorsey’s first ever Tweet for nearly €2.5 million, and the record-breaking sale of a piece of art by Beetle for €58.2 million.

Read next: ‘Very unlikely’ that Air Malta will fly to Spain this summer – Executive Chairman