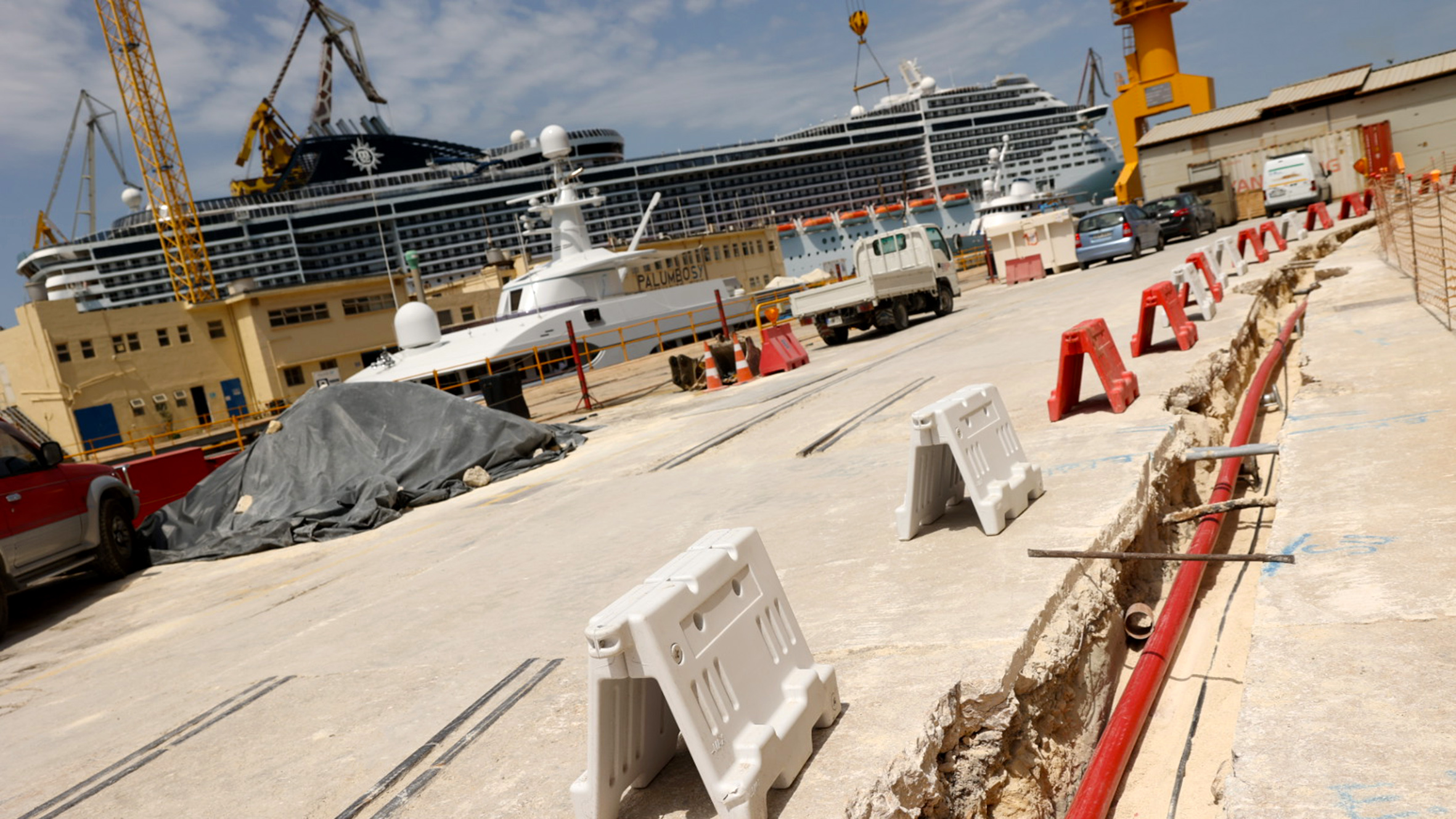 The Government agency responsible for roadworks and other key infrastructure has announced that it will be re-routing a section of the shore-to-ship high voltage cable network to the Palumbo Shipyards, following strong pressure from resident groups and NGOs.

In a statement released on Thursday, Infrastructure Malta said it had taken note of the appeals of Cottonera residents to equip the shipyards in Cospicua with the green technology.

It therefore modified the project to make sure that the new electricity network for this system can also cater for this ship repair facility’s largest dry dock, Dock 6, and Parlatorio Wharf next to it.

In April, citizen action group Azzjoni Tuna Artna Lura (Action Give Us Our Land Back) issued a plea to authorities to make sure that the Cottonera area is not left out of the project, noting that the air quality is so bad that “in some areas clothes hung out to dry become discoloured by the polluted air.”

The group noted that Infrastructure Malta compared eight hours of a single cruise ship’s running engines to the emissions generated by 300,000 cars driving from Marsaxlokk to Ċirkewwa.

The infrastructure agency has been carrying out a project, using EU funds, to install shore power facilities at parts of the Grand Harbour and Birżebbuġa, allowing ships to draw power from the national grid.

This is meant to ensure compliance with an EU directive stating that ships should turn off their engines while in port.

This is not the first time that Azzjoni Tuna Artna Lura’s actions have led to authorities taking action.

In March, the Ombudsman ruled that two oil rigs stationed at Palumbo Shipyards had no right to be there. The rigs were subsequently removed.

What is the Grand Harbour Clean Air Project?

The Grand Harbour Clean Air Project (GHCAP) aims to reduce more than 90 per cent of the air pollution emitted by large vessels.

The project contractors are excavating trenches in several locations along the Grand Harbour shoreline to lay the underground electricity cables that will distribute electricity from an existing Enemalta plc primary substation in Jesuits Hill, Marsa to the Grand Harbour’s cruise liner quays in Floriana, Marsa and Senglea.

The first branch of this network is ready. It connects the existing Enemalta substation with the Deep Water Quay, where Infrastructure Malta is preparing to build one of the project’s two frequency converter stations.

The project contractors are also constructing underground ducts for the 11-kilovolt cables which will distribute power from this station to the quays and the shore-to-ship connection points at Pinto Wharf, along the Valletta side of the Grand Harbour.

The second stretch of cables is directed towards Bridge Wharf and Church Wharf in Marsa. From here, submarine cables will extend the network to Coal Wharf in Corradino, Paola and to Boiler Wharf, in Senglea, on the other side of the Harbour.

This branch of the network is now also incorporating the Palumbo Shipyards, where cable laying works are in progress this week.

Infrastructure Malta is spearheading discussions between the port authorities, the utilities involved and other stakeholders with a view to incorporating the installation of shore-to-ship connections at the Cospicua shipyards in the second phase of this project, which will introduce shoreside electricity to Laboratory Wharf and to Ras Hanzir (Fuel Wharf), in Paola, as well.

At Ras Hanzir, Infrastructure Malta will be building a new 360-metre cargo handling facility in the coming years.

These two locations will provide shoreside electricity to Ro-Ro ships as well.

Preliminary studies indicate that through the GHCAP, within 20 years Malta will save up to €375 million in costs linked to the measurable consequences of air pollution, such as impacts on health, the natural environment, infrastructure and agriculture.

It will also reduce the impact of cruise liner noise and engine vibrations in the Grand Harbour area.

Through the first phase of this project, Infrastructure Malta will drastically reduce the emissions of cruise ships visiting Malta. By switching off their auxiliary engines, cruise liners will emit 93 per cent less nitrogen oxides, 92.6 per cent less particulate matter and 99.6 per cent less sulphur dioxide. These pollutants are among the principal causes of respiratory illnesses and other health problems.

The first phase of the GHCAP will also cut 39.6 per cent of the cruise liners’ carbon dioxide emissions, which contribute to the climate emergency.

Read next: Confirmed: No additions to UK travel green list