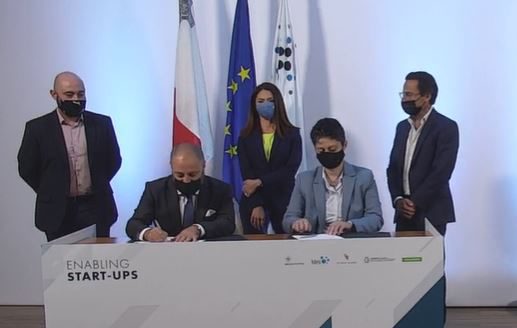 The start-up environment continues to flourish with a new agreement between Malta Enterprise and the Malta Chamber of Commerce, Enterprise and Industry creating new synergies for the sector.

The Memorandum of Understanding (MoU) comes hot on the heels of another agreement signed between Malta Enterprise and the University of Malta’s (UM) Centre for Entrepreneurship and Business Incubation (CEBI), that sought to help people with ideas turn their vision into a business.

Now, Malta Enterprise is collaborating with The Malta Chamber to provide established start-ups with more opportunities for growth, both locally and internationally.

Speaking at the signing at the Malta Enterprise-run Kordin Business Incubation Centre (KBIC), Marisa Xuereb, who was recently appointed president of the Chamber, said that start-ups can take a lot of benefits from the partnership.

She highlighted the Chamber’s growing standing in national and international society, saying, “Start-ups coming out on the Chamber platform are sure to get noticed.”

The value start-ups can both derive from and bring to the Chamber extends to the potential for mutually beneficial cooperation between older and newer businesses, said Ms Xuereb, noting that long-established businesses may find the innovative offerings of start-ups to be valuable, while start-ups can find eager customers who can also share their wealth of experience.

“The average age of the Chamber is constantly decreasing,” she said, as she appealed to start-ups to seriously consider taking their place in the organisation, adding that “This is about business people coming together on an equal footing.”

Minister for Energy, Enterprise and Sustainable Development Miriam Dalli noted with satisfaction the large number of agreements in place between Malta Enterprise and other entities that serve to create a cohesive national start-up environment rather than a fragmented one.

She pointed to agreements with Tech.mt, MCAST, the Arts Council and more recently with the UM-based TakeOff, saying that the addition of The Malta Chamber brings another level of synergy that would prove useful for budding entrepreneurs.

Minister Dalli said that she believes in the potential of starts-ups in attracting new economic niches, saying that they are essential to “make Malta future proof, prioritise environmental sustainability, and generate quality jobs”.

She praised Malta Enterprise for the efforts it is doing to improve the start-up ecosystem. It does this, she said, by offering incentives and initiatives, by facilitating communications with other entities that offer guidance and mentoring, and also by running the KBIC, which currently hosts 13 start-ups.