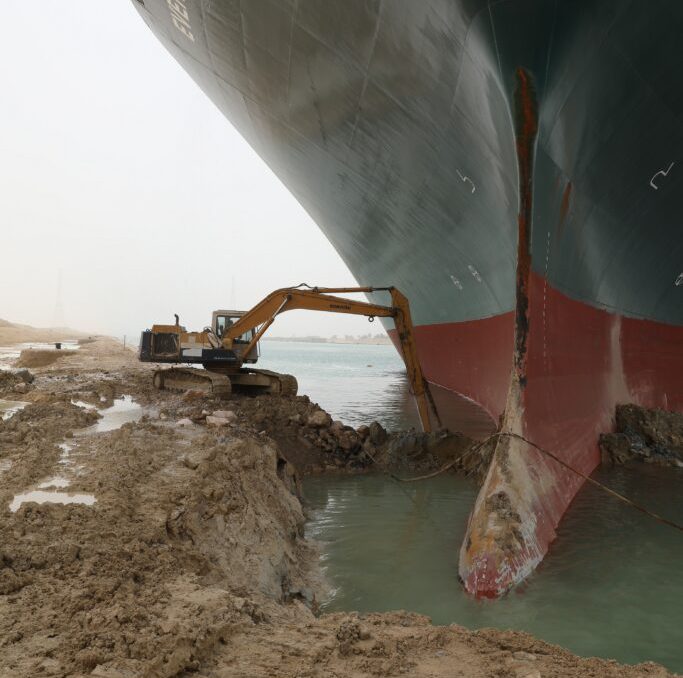 The owner and insurers of the ship stuck in the Suez Canal, that has caused major backlogs, may face claims totalling millions of dollars.

The 400-metre, 224,000 tonne Ever Given, one of the largest container ships in the world, ran aground on Tuesday morning after being hit by strong winds.

The Ever Given, bound for the Netherlands, was travelling northwards through the canal from China. It was built in 2018 and is operated by Taiwanese company “Evergreen Marine”.

The ship, which has a length equivalent to four football fields, is now lodged sideways on the sandy banks of the canal, blocking the 190 km shipping route.

Insurers and brokers told Reuters that ship owner Shoei Kisen KK, a Japanese firm, and its insurers could face claims for loss of revenue from the Suez Canal Authority (SCA), a well as from other ships whose passage has been disrupted.

Although Shoei Kisen could not be reached for comment, insurance sources said that container ships of this size are likely insured for hull and machinery damage of $100-140 million.

The cost of the salvage operation is also borne by the hull and machinery insurer.

“It is potentially the world’s biggest ever container ship disaster without a ship going bang,” one shipping lawyer, who declined to be named, said.

In addition, sources told Reuters that owners of the cargo on board the ship and on other ships stuck in the Canal will likely claim from the ship’s liability insurer for losses to perishable goods or missed delivery deadlines.

“If you have a constant build-up of ships, there are massive supply chain issues,” said Marcus Baker, global head of marine and cargo at insurance broker Marsh.

At least 30 ships were blocked to the north of the Ever Given, and three to the south, local sources said. Several dozen ships could also be seen grouped around the northern and southern entrances to the canal.

Compounding insurers’ headaches, claims could also be sought for damage to the canal, as photos shared by the SCA showed a digger removing earth and rock from the bank of the canal around the ship’s bow.