The Malta Chamber and the Central Bank of Malta ask: Is inflation here to stay or is it transitory? 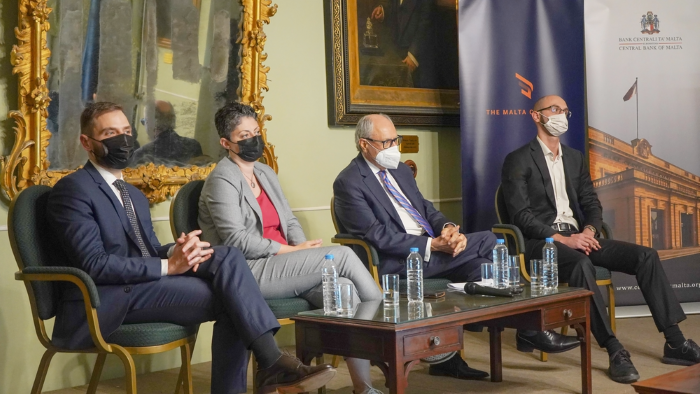 As inflation continues to rise, the question on whether it is a temporary phenomenon or one we need to get used to has been floated regularly.

An event organised by The Malta Chamber and the Central Bank of Malta, titled Inflation: Trends, Threats and Transitions, sought answers as to whether the current global inflationary trends will be transitory in nature or will persist in the longer term, and what both scenarios could mean in terms of their impact on the Maltese economy.

The seminar was aimed at economists and business leaders in the country in order to raise a national discussion on the subject of inflation.

“The bottlenecks created by the deep recession caused by the pandemic and the relatively quick recovery that followed, coupled with the pursuit of the twin transition of digitalisation and green economy has resulted in an acute concern on inflationary pressures by businesses, said Marisa Xuereb, President of The Malta Chamber during her welcome address at an event co-organised alongside the Central Bank of Malta, titled Inflation: Trends, Threats and Transitions.

She said that discussions on how policy makers should address these issues are important to ensure that Malta does not enter into an inflationary spiral that could jeopardise recovery efforts.

In his keynote speech on inflation, the Governor of the Central Bank of Malta Edward Scicluna explained that contrary to popular perception the ECB has been praying and hoping that one day inflation would pick up from a decade of very low inflation and get itself anchored at around two per cent.

Prof. Scicluna said that anything above or below that rate is equally undesirable. The two per cent would give enough leeway for monetary policy to be applied without the headache of negative rates, asset purchase programmes, and the like.

During the event, economist and Saxo Bank Director Christopher Dembik spoke of the global scenario in terms of inflationary trends and some of the key factors which are leading to this increase. These include, amongst others, the bottlenecks in terms of global supply chains which are seen as cyclical in nature, the green transition and shift towards ESGs, and lack of investment in energy.

He spoke of the possibility that part of the inflation will become permanent or structural, particularly due to the green transition business operators and economies need to undertake during the next years. This in turn will limit the possibility of exploiting productivity gains by the fact that some of the green technology is still in its infancy.

The results also indicated that the relative income of low-income households is harder hit when prices for basic necessities, such as food, increase.

Mr Darmanin concluded by suggesting the need for an additional price index, separate from the RPI, based on the basket of goods purchased by low-income households, which could serve as a guide in measuring by how much social benefits should be increased over and above the COLA to maintain the purchasing power of low-income households.

Read next: ‘It will take a while, but I believe we will get there,’ says Chef Patron Andrew Vella on staffing crisis