Emirates reveals the most popular movies, TV and sport programmes enjoyed at 40,000 feet in 2021

Tenet, Friends: The Reunion, and live sport top the entertainment charts in the sky 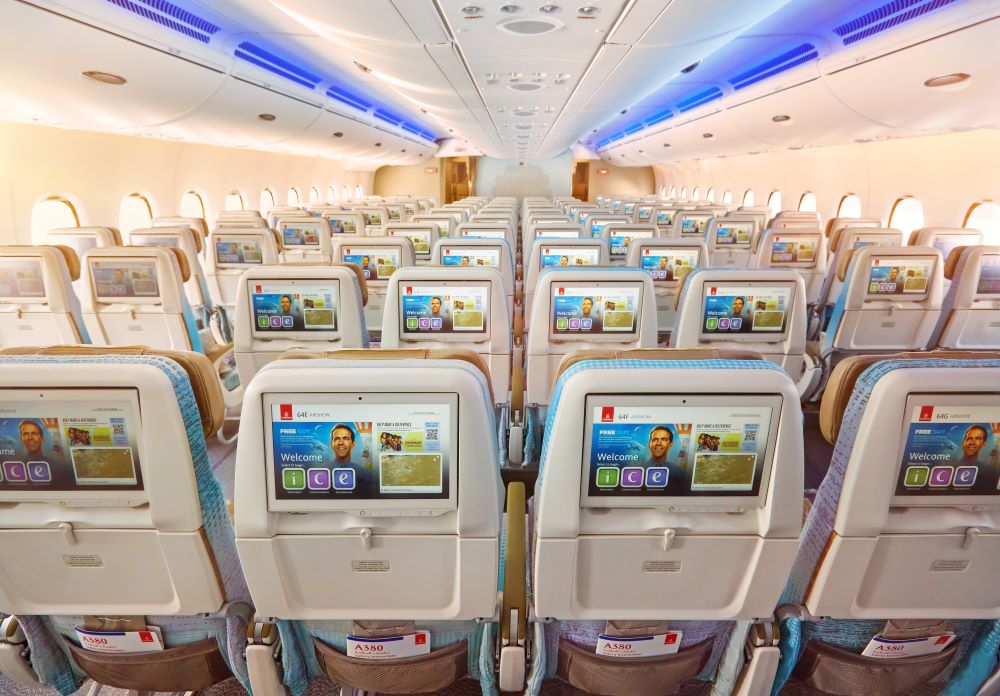 ‘Sci-Fi action thriller Tenet and family favourite Cruella were among the most-watched movies, while Friends: The Reunion topped the TV charts at 40,000 feet in 2021, according to viewing trends released today by Emirates.

The largest airline in the world offers more than 4,500 channels of entertainment on ice (Information Communication Entertainment), its multi award-winning inflight entertainment system where passengers can watch the latest movies and TV series, listen to music and podcasts, follow their flight’s progress and see views from the aircraft’s external cameras; watch live news and sport, and stay connected through Wi-Fi.

The most viewed movie on Emirates flights last year stars John David Washington and Robert Pattinson and features Michael Caine and Kenneth Branagh. Tenet follows a secret agent who learns to manipulate the flow of time to prevent an attack from the future that threatens to annihilate the present world.

Will Smith and Martin Lawrence’s action and comedy Bad Boys for Life and Hitman’s Wife’s Bodyguard with Ryan Reynolds, Samuel L. Jackson and Salma Hayek were also among the top most-watched movies on a list that trended towards action, comedy and thriller movies.

World cinema is also very popular on ice and top picks in 2021 included French drama Who You Think I Am starring Juliette Binoche and the Oscar-winning film from Denmark Another Round.

Across all cabin classes, family movies were also hugely popular and the top performing films in this genre in 2021 included Cruella, a big hit on board starring Emma Stone and Emma Thompson and Mulan, the story of a young Chinese maiden who disguises herself as a male warrior to save her father.

Animated films Luca and Soul were also hugely popular, as was the new Wizarding World collection on ice, where adults and children alike enjoyed watching the Harry Potter and Fantastic Beasts films.

There are more than 1,500 movies from multiple genres available in up to 45 languages for passengers in First, Business and Economy Class on ice.

Emirates’ 2021 launch of TV series from HBO Max proved very popular with customers. Friends: The Reunion which was exclusively on board Emirates in the region, was among the most watched TV programmes. Other top TV selections included the award-winning drama series, Mare of Easttown starring Kate Winslet, and The Flight Attendant, a comedy, drama, mystery and thriller all-in-one, starring Kaley Cuoco. The HBO Max content on ice continues to delight passengers in 2022, with the addition of all three seasons of the hit series Succession.

For many sports fans, not being able to tune into their favourite sporting events and live games is unthinkable, but with Emirates, they never have to miss a minute of live action on the Sport 24 and Sport 24 Extra channels.

Some of the top live sporting events that customers enjoyed live on board in 2021 were the UEFA Euro 2020, the rescheduled 2020 Summer Olympics, Wimbledon 2021, The British Open, NBA finals and many more.

Emirates operates a modern fleet of Boeing 777 and Airbus A380 aircraft and is currently flying to a network of more than 120 destinations across six continents, as it rebuilds its network safely and appropriately following the impact of the COVID-19 pandemic.