Major party leaders butt heads on business once again. Here’s what they said 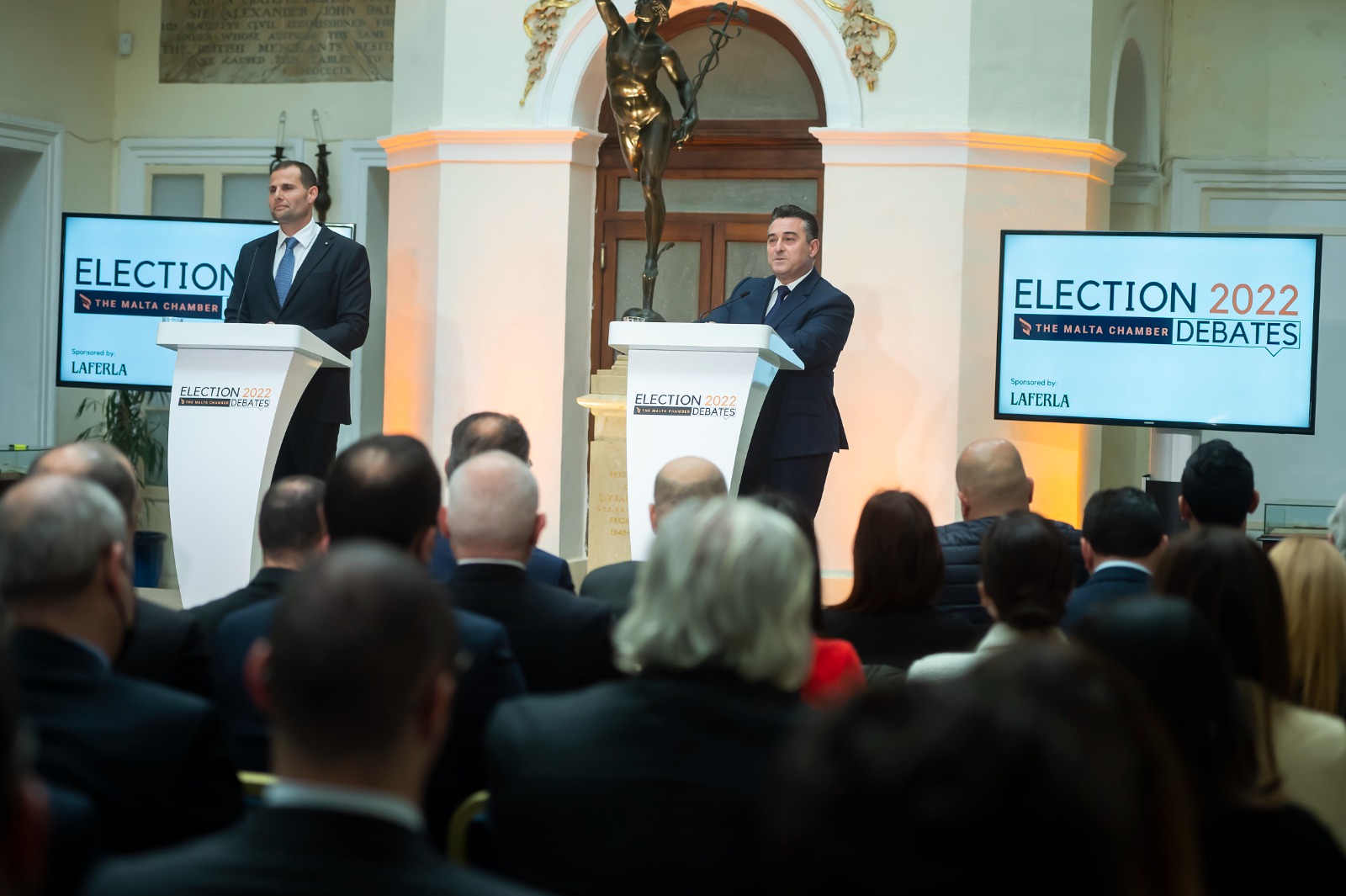 Malta’s election continued in full swing today as the two leaders of the major parties went head-to-head at an event organised for the business community by the Malta Chamber of Commerce, Enterprise and Industry.

Held at the organisation’s premises in Valletta, the event was more akin to a debate than the event held just days ago, when Labour leader Robert Abela and Nationalist leader Bernard Grech delivered long speeches to members of the Malta Chamber of SMEs.

“The law is clear that the Government must seek advice from the Malta Council for Economic and Social Development,” she said, calling for more resources to be allocated to the grouping of Malta’s major representative bodies.

She added that parties would do well to consult with social partners before including proposals with far-reaching implications in their electoral manifestos – ostensibly a reference to the Labour Party’s pledge to make union membership mandatory, which has been heavily criticised by business lobbies.

The Labour leader backtracked on his party’s pledge, saying that “workers who do not want to join a union will not be forced to do so”.

In response to allegations that both parties electoral programmes amount to little more than list of giveaways to the electorate, the Prime Minister insisted that the PL’s proposals are all costed, saying they will cost €2.3 billion, and pointed out that the PN has produced no such figure.

He also reiterated his claim that a new Labour Government will target a total GDP figure topping €20 billion by the end of the next legislature It is currently just over €14 billion.

“It’s ambitious, but we will get there,” he said.

Dr Grech focused on the PN’s pledge to build up 10 new economic sectors, saying that doing so is “essential to Malta’s economic recovery”. He also called out the Labour Party for not creating a single new economic sector in its nine years in power.

He also rebutted the Prime Minister’s claim that the PN had produced no figures, saying that the ON has clearly earmearked €1 billion for this investment.

Dr Grech also committed a new PN Governmebt to continue subsidising energy prices, saying there is a “social obligation” for it to do so.

Debate moderator Rachel Attard pointedly asked the Prime Minister to comment on clientelism, prompting him to admit that the parochial nature of Malta’s political system incentivises some voters to seek out favours”.

Dr Grech jibed that the Prime Minister always looks for excuses, and asked what sending cheques in the mail on the eve of an election is if not the most unabashed form of clientelism.

“Is this good governance? Ministries are calling up voters and pestering them to ask them whether ‘they need something’… surely I won’t be competing with you on giving people government jobs,” Dr Grech said.

Dr Abela was largely non-committal on the issue, with most emphasis placed on banks, saying that they must be partners to the business community, not a hindrance.

Dr Grech meanwhile blamed the current administration for the greylisting, and said the country’s imperative must now be to get out of it and improve its reputation, something he said would not happen overnight.

Turning to the banking issues being faced by business, he said banks must realise that also have social responsibility. “It can’t be that those wishing to invest continually suffer from these problems.

He added that banks’ overzealous approach to withdrawals must also stop, asking, “What is the use of having money if you can’t spend it?”