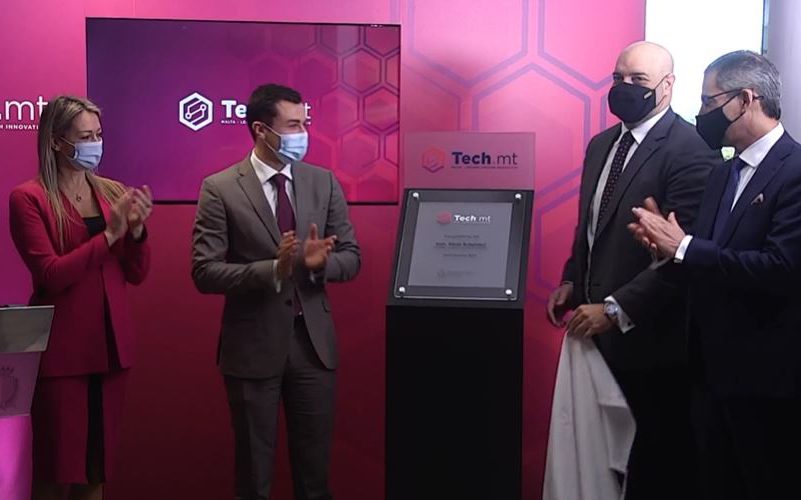 The development of Malta’s tech sector must place innovation at the centre of the Maltese economy, said Minister for Economy Silvio Schembri during the inauguration of Tech.mt’s new offices.

Tech.mt, set up as a partnership between the Government and the Malta Chamber of Commerce, Enterprise and Industry, inaugurated its new offices in Zejtun on Tuesday.

Tech.mt chairman Mark Bugeja compared the private-public partnership to running a business. “The businesses that succeed in the long term are those who can foresee what’s coming,” he said. “Tech.mt exists because Malta saw a new ecosystem being developed and responded.”

“Malta did something about it, and today we have an advantage over other countries that only talked about it.”

Describing the organisation’s work over its year and a half of operations, Mr Bugeja mentioned the investment in virtual fairs, both international and local, that sought to portray Malta as a hub for the new digital ecosystem.

Mr Bugeja noted that COVID played a role in the quick development of the sector. “Two years ago,” he said, “all the new businesses that thought about tech were on their own. Today, awareness of shifting digital realities has gone down to the level of the consumer, and everyone is now realising there is another way to exist and work.”

He said this acceleration helped Tech.mt move forward with the projects planned for 2021.

Taking the podium, Minister Schembri said the “young but respected” organisation had proved itself and showed why it is needed during the pandemic, noting that businesses are increasingly recognising how technology needs to be an integral part of operations.

Mr Schembri said the role of Tech.mt is central in promoting Malta’s digital ecosystem to attract new investment, warning that the international investment environment will become much more competitive as countries seek out economic injections post-COVID.

Touting Malta’s developed digital infrastructure, Mr Schembri said digital must go beyond being a part of Malta’s economy to become a central aspect of it.

Turning to developments in the way companies do business, Mr Schembri welcomed news that the rate of take up of cloud computing by local companies had increase from 35 per cent in 2016 to 53 per cent in 2020. Similarly, he said that teleworking, was no longer a luxury or reward offered to workers, but a necessity.

Mr Schembri said the decision for Tech.mt to be housed in the same building as other Government entities was a strategic one.

“In this building we find the Malta Business Registry, the International Tax Unit, and Gaming Malta, creating a one stop shop for companies and an ecosystem of investment.”

In a brief statement, David Xuereb, president of the Chamber of Commerce, said he welcomed the Government’s vision for economic development, based on good governance, quality, climate change and technology and innovation.

“The fact we have this partnership between the Chamber and the Government shows that both are focusing on transforming our economy in this way.”

Read next: iGaming industry left in the lurch by UK/EU data-sharing negotiations can only ‘wait and see’