Bars and restaurants are required to close their doors from midnight 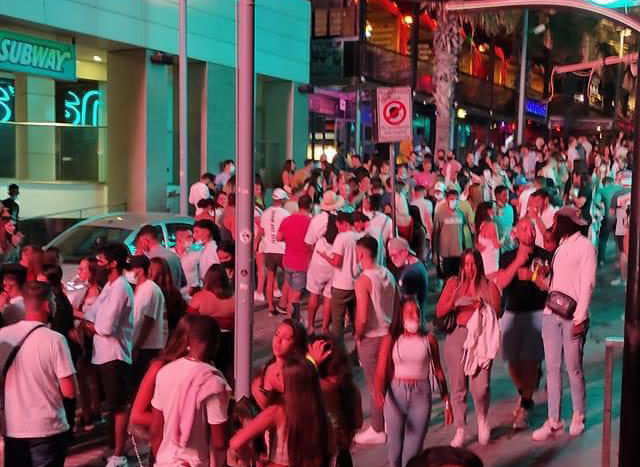 The Malta Entertainment Industry and Arts Association (MEIA) has once again called out “discrimination” against the industries it represents, sharing a photo of crowded Paceville streets, filled with mostly maskless revellers, “right after midnight”.

Reiterating calls for sympathisers to join its ‘Daqshekk Siekta’ protest next week, the post drew frustrated responses from followers.

Despite the frustrating optics of the photograph, however, it is worth noting that with bars and restaurants being required to close at midnight, it is unclear if the crowds depicted stayed there long.

The MEIA has stood in firm disagreement with the measures to be introduced when limited cultural and social events are allowed to resume.

From 5th July, indoor events will be permitted with one (fully vaccinated) person per four square metres, capped at 100 persons.

Should the situation remain under control, a fortnight later this cap will increase to 150 persons and on 15th August, up to 200.

The MEIA, however, has called for a staggered approach starting with a 25 per cent occupancy from mid-June, for licensed venues such as clubs and controlled outdoor events with a maximum capping of 300 people.

“The measures discriminate against our sectors because there isn’t a level playing field with other business operators, placing everyone in the same basket and do not address any form of sustainability and feasibility for the sector”, the industry group has said.

It also juxtaposes the situation in many other countries across Europe which have lower vaccine rates than Malta, but where football matches are being hosted with spectators as part of the EURO 2020s.

Other key stakeholders in the hospitality industry, including Eden Leisure Group Operations Director Kate de Cesare have also expressed frustration, comparing the rigorous and damaging restrictions imposed on events and entertainment business to the unrestricted outdoor parties springing up.

As was the case with previous phases of the virus in Malta, the enforcement of COVID mitigation measures has been a particularly controversial topic.

Especially when considering the aforementioned restrictions for the upcoming reopening of social and cultural events, the sight of massive informal parties being held will continue to feel like a slap in the face for Malta’s long-struggling events and hospitality industries.

Read next: Jet engines by Rolls-Royce to run on synthetic fuels following drive towards net-zero emissions