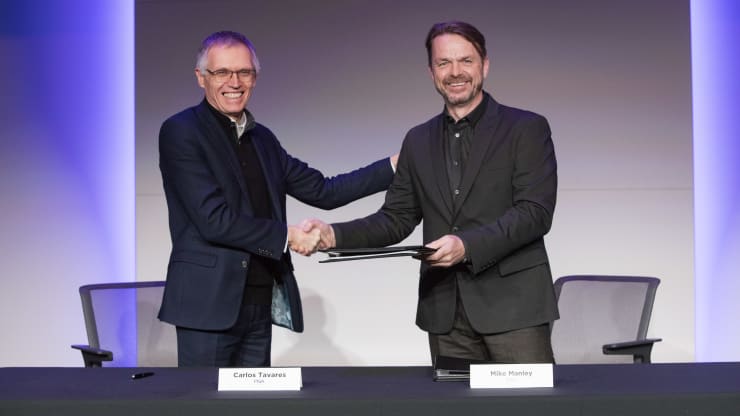 Shareholders of Groupe PSA and Fiat Chrysler have approved the merger of the two companies, announced in 2019, to create the world’s fourth-largest car manufacturer by volume.

The outcome of the vote by PSA and Fiat shareholders came two weeks after the European Commission gave conditional approval to the mega-merger announced in late 2019.

Fiat Chrysler was established in 2014 through a merger of the Italian Fiat and the American Chrysler, and today manufactures brands like Alfa Romeo, Dodge, Jeep, Lancia and Maserati.

The merger between the French and US-Italian automobile giants is to be conducted on a 50/50 all stock basis, and is expected to save the group billions of euros in synergies each year.

Announced in late 2019 and delayed by the COVID-19 pandemic, the merger will allow Fiat-Chrysler to strengthen its presence in Europe and the French group to regain a foothold in the US.

It is also seen as crucial for the two groups to undertake the investment needed to transition to clean car technology.

“This merger was a question of survival, and that goes for Fiat as for PSA”, according to Giuliano Noci, professor of strategy at the Polytechnic business school in Milan.

He cited the “enormous technological and strategic challenges” faced by both as well as the damage wrought by the pandemic.

The name Stellantis, announced in July 2020, comes from the Latin verb “stello”, meaning “to brighten with stars”.

Ranking behind global rivals Volkswagen, Renault-Nissan-Mitsubishi and Toyota, Stellantis will be the fourth-largest carmaker by volume and the third-largest by revenue, with a workforce of over 400,000.

“Only the most agile, with a Darwinian spirit, will survive,” PSA chief Carlos Tavares, who will take the helm of the merged group, said in November.

The European Commission had been worried the merger could affect competition in Europe’s lucrative van market, with PSA and FCA together accounting for 34 per cent of market share. To assuage those concerns, the commission said PSA would continue an agreement with Toyota to manufacture vans to be sold under the Japanese brand in Europe.

The disruptions wrought by COVID-19, which ground manufacturing to a halt for several weeks in the first half of 2020, forced PSA and Fiat to change the terms of their tie-up to ensure it remained a merger of equals.

FCA has notably agreed to lower the amount of an exceptional dividend paid to its shareholders. For its part, PSA has decided to sell 7% of the French equipment manufacturer Faurecia before distributing the rest to the shareholders of Stellantis, rather than its shareholders alone as agreed to previously.

The two companies have so far shown relative resilience in the face of the pandemic. Fiat-Chrysler posted net profits of €1.2-billion in the third quarter, compared with losses of €1.04 billion in the second quarter when much of the world was in lockdown.

PSA sold 589,000 fewer vehicles in the third quarter but sold them for more money as part of a strategy to maximise profitability and cash flow which boosted turnover by 1.2 per cent.

At the time when the merger was announced Tavares assured no plant would be closed, but unions in France remain sceptical.

“On the whole it’s a good insurance policy for the future of our group. Those who don’t make the shift risk being left by the wayside,” a representative for the CFTC union at PSA, Franck Don, said.

But he wondered: “What synergies will they find and what consequences will that have for sites in France?”

Read next: Bitcoin at €25,556 as record rally continues